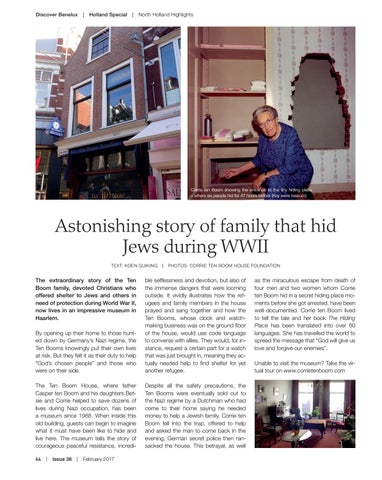 Corrie ten Boom showing the entrance to the tiny hiding place – where six people hid for 47 hours before they were rescued.

By opening up their home to those hunted down by Germany’s Nazi regime, the Ten Booms knowingly put their own lives at risk. But they felt it as their duty to help “God’s chosen people” and those who were on their side.

ble selflessness and devotion, but also of the immense dangers that were looming outside. It vividly illustrates how the refugees and family members in the house prayed and sang together and how the Ten Booms, whose clock and watchmaking business was on the ground floor of the house, would use code language to converse with allies. They would, for instance, request a certain part for a watch that was just brought in, meaning they actually needed help to find shelter for yet another refugee.

The Ten Boom House, where father Casper ten Boom and his daughters Betsie and Corrie helped to save dozens of lives during Nazi occupation, has been a museum since 1988. When inside this old building, guests can begin to imagine what it must have been like to hide and live here. The museum tells the story of courageous peaceful resistance, incredi-

Despite all the safety precautions, the Ten Booms were eventually sold out to the Nazi regime by a Dutchman who had come to their home saying he needed money to help a Jewish family. Corrie ten Boom fell into the trap, offered to help and asked the man to come back in the evening. German secret police then ransacked the house. This betrayal, as well

The extraordinary story of the Ten Boom family, devoted Christians who offered shelter to Jews and others in need of protection during World War II, now lives in an impressive museum in Haarlem.

as the miraculous escape from death of four men and two women whom Corrie ten Boom hid in a secret hiding place moments before she got arrested, have been well documented. Corrie ten Boom lived to tell the tale and her book The Hiding Place has been translated into over 60 languages. She has travelled the world to spread the message that “God will give us love and forgive our enemies”. Unable to visit the museum? Take the virtual tour on www.corrietenboom.com