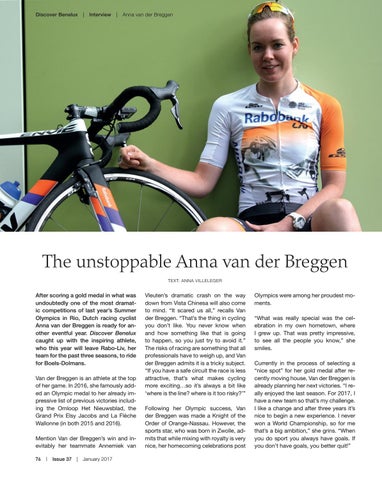 After scoring a gold medal in what was undoubtedly one of the most dramatic competitions of last year’s Summer Olympics in Rio, Dutch racing cyclist Anna van der Breggen is ready for another eventful year. Discover Benelux caught up with the inspiring athlete, who this year will leave Rabo-Liv, her team for the past three seasons, to ride for Boels-Dolmans. Van der Breggen is an athlete at the top of her game. In 2016, she famously added an Olympic medal to her already impressive list of previous victories including the Omloop Het Nieuwsblad, the Grand Prix Elsy Jacobs and La Flèche Wallonne (in both 2015 and 2016). Mention Van der Breggen’s win and inevitably her teammate Annemiek van 76  |  Issue 37  |  January 2017

Vleuten’s dramatic crash on the way down from Vista Chinesa will also come to mind. “It scared us all,” recalls Van der Breggen. “That’s the thing in cycling you don’t like. You never know when and how something like that is going to happen, so you just try to avoid it.” The risks of racing are something that all professionals have to weigh up, and Van der Breggen admits it is a tricky subject. “If you have a safe circuit the race is less attractive, that’s what makes cycling more exciting…so it’s always a bit like ‘where is the line? where is it too risky?’” Following her Olympic success, Van der Breggen was made a Knight of the Order of Orange-Nassau. However, the sports star, who was born in Zwolle, admits that while mixing with royalty is very nice, her homecoming celebrations post

Olympics were among her proudest moments. “What was really special was the celebration in my own hometown, where I grew up. That was pretty impressive, to see all the people you know,” she smiles. Currently in the process of selecting a “nice spot” for her gold medal after recently moving house, Van der Breggen is already planning her next victories. “I really enjoyed the last season. For 2017, I have a new team so that’s my challenge. I like a change and after three years it’s nice to begin a new experience. I never won a World Championship, so for me that’s a big ambition,” she grins. “When you do sport you always have goals. If you don’t have goals, you better quit!”