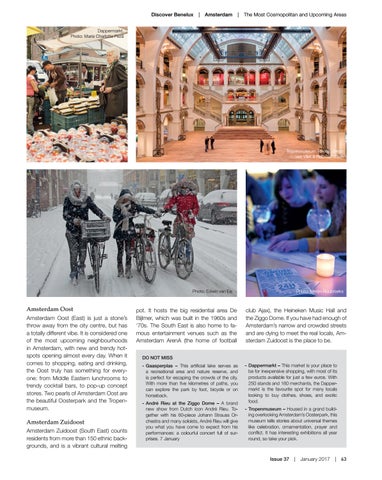 Amsterdam Oost Amsterdam Oost (East) is just a stone’s throw away from the city centre, but has a totally different vibe. It is considered one of the most upcoming neighbourhoods in Amsterdam, with new and trendy hotspots opening almost every day. When it comes to shopping, eating and drinking, the Oost truly has something for everyone: from Middle Eastern lunchrooms to trendy cocktail bars, to pop-up concept stores. Two pearls of Amsterdam Oost are the beautiful Oosterpark and the Tropenmuseum.

pot. It hosts the big residential area De Bijlmer, which was built in the 1960s and ‘70s. The South East is also home to famous entertainment venues such as the Amsterdam ArenA (the home of football

club Ajax), the Heineken Music Hall and the Ziggo Dome. If you have had enough of Amsterdam’s narrow and crowded streets and are dying to meet the real locals, Amsterdam Zuidoost is the place to be.

DO NOT MISS - Gaasperplas – This artificial lake serves as a recreational area and nature reserve, and is perfect for escaping the crowds of the city. With more than five kilometres of paths, you can explore the park by foot, bicycle or on horseback. - André Rieu at the Ziggo Dome – A brand new show from Dutch icon André Rieu. Together with his 60-piece Johann Strauss Orchestra and many soloists, André Rieu will give you what you have come to expect from his performances: a colourful concert full of surprises. 7 January

- Dappermarkt – This market is your place to be for inexpensive shopping, with most of its products available for just a few euros. With 250 stands and 160 merchants, the Dappermarkt is the favourite spot for many locals looking to buy clothes, shoes, and exotic food. - Tropenmuseum – Housed in a grand building overlooking Amsterdam’s Oosterpark, this museum tells stories about universal themes like celebration, ornamentation, prayer and conflict. It has interesting exhibitions all year round, so take your pick.