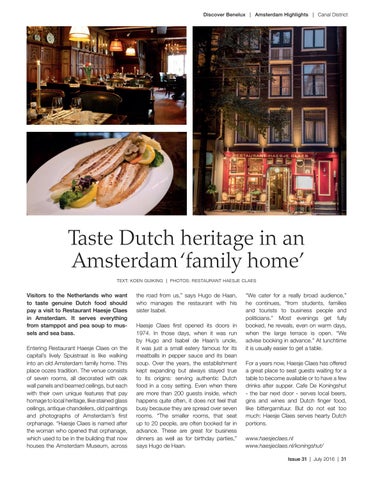 Visitors to the Netherlands who want to taste genuine Dutch food should pay a visit to Restaurant Haesje Claes in Amsterdam. It serves everything from stamppot and pea soup to mussels and sea bass. Entering Restaurant Haesje Claes on the capital’s lively Spuistraat is like walking into an old Amsterdam family home. This place oozes tradition. The venue consists of seven rooms, all decorated with oak wall panels and beamed ceilings, but each with their own unique features that pay homage to local heritage, like stained glass ceilings, antique chandeliers, old paintings and photographs of Amsterdam’s first orphanage. “Haesje Claes is named after the woman who opened that orphanage, which used to be in the building that now houses the Amsterdam Museum, across

the road from us,” says Hugo de Haan, who manages the restaurant with his sister Isabel. Haesje Claes first opened its doors in 1974. In those days, when it was run by Hugo and Isabel de Haan’s uncle, it was just a small eatery famous for its meatballs in pepper sauce and its bean soup. Over the years, the establishment kept expanding but always stayed true to its origins: serving authentic Dutch food in a cosy setting. Even when there are more than 200 guests inside, which happens quite often, it does not feel that busy because they are spread over seven rooms. “The smaller rooms, that seat up to 20 people, are often booked far in advance. These are great for business dinners as well as for birthday parties,” says Hugo de Haan.

“We cater for a really broad audience,” he continues, “from students, families and tourists to business people and politicians.” Most evenings get fully booked, he reveals, even on warm days, when the large terrace is open. “We advise booking in advance.” At lunchtime it is usually easier to get a table. For a years now, Haesje Claes has offered a great place to seat guests waiting for a table to become available or to have a few drinks after supper. Cafe De Koningshut - the bar next door - serves local beers, gins and wines and Dutch finger food, like bittergarnituur. But do not eat too much: Haesje Claes serves hearty Dutch portions. www.haesjeclaes.nl www.haesjeclaes.nl/koningshut/ Issue 31 | July 2016 | 31