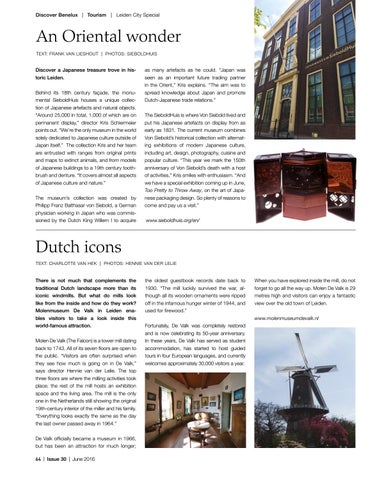 Discover a Japanese treasure trove in historic Leiden. Behind its 18th century façade, the monumental SieboldHuis houses a unique collection of Japanese artefacts and natural objects. “Around 25,000 in total, 1,000 of which are on permanent display,” director Kris Schiermeier points out. “We’re the only museum in the world solely dedicated to Japanese culture outside of Japan itself.” The collection Kris and her team are entrusted with ranges from original prints and maps to extinct animals, and from models of Japanese buildings to a 19th century toothbrush and denture. “It covers almost all aspects of Japanese culture and nature.” The museum’s collection was created by Philipp Franz Balthasar von Siebold, a German physician working in Japan who was commissioned by the Dutch King Willem I to acquire

as many artefacts as he could. “Japan was seen as an important future trading partner in the Orient,” Kris explains. “The aim was to spread knowledge about Japan and promote Dutch-Japanese trade relations.” The SieboldHuis is where Von Siebold lived and put his Japanese artefacts on display from as early as 1831. The current museum combines Von Siebold’s historical collection with alternating exhibitions of modern Japanese culture, including art, design, photography, cuisine and popular culture. “This year we mark the 150th anniversary of Von Siebold’s death with a host of activities,” Kris smiles with enthusiasm. “And we have a special exhibition coming up in June, Too Pretty to Throw Away, on the art of Japanese packaging design. So plenty of reasons to come and pay us a visit.” www.sieboldhuis.org/en/

There is not much that complements the traditional Dutch landscape more than its iconic windmills. But what do mills look like from the inside and how do they work? Molenmuseum De Valk in Leiden enables visitors to take a look inside this world-famous attraction. Molen De Valk (The Falcon) is a tower mill dating back to 1743. All of its seven floors are open to the public. “Visitors are often surprised when they see how much is going on in De Valk,” says director Hennie van der Lelie. The top three floors are where the milling activities took place; the rest of the mill hosts an exhibition space and the living area. The mill is the only one in the Netherlands still showing the original 19th-century interior of the miller and his family. “Everything looks exactly the same as the day the last owner passed away in 1964.” De Valk officially became a museum in 1966, but has been an attraction for much longer; 64 | Issue 30 | June 2016

the oldest guestbook records date back to 1930. “The mill luckily survived the war, although all its wooden ornaments were ripped off in the infamous hunger winter of 1944, and used for firewood.”

When you have explored inside the mill, do not forget to go all the way up. Molen De Valk is 29 metres high and visitors can enjoy a fantastic view over the old town of Leiden. www.molenmuseumdevalk.nl

Fortunately, De Valk was completely restored and is now celebrating its 50-year anniversary. In these years, De Valk has served as student accommodation, has started to host guided tours in four European languages, and currently welcomes approximately 30,000 visitors a year.