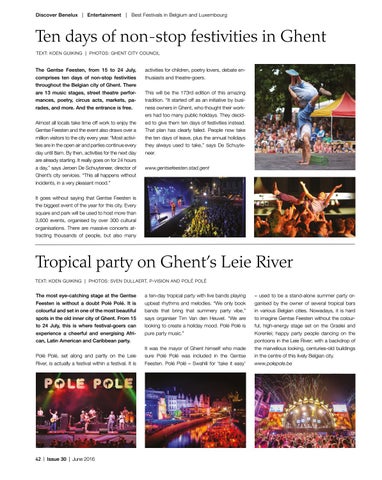 The Gentse Feesten, from 15 to 24 July, comprises ten days of non-stop festivities throughout the Belgian city of Ghent. There are 13 music stages, street theatre performances, poetry, circus acts, markets, parades, and more. And the entrance is free. Almost all locals take time off work to enjoy the Gentse Feesten and the event also draws over a million visitors to the city every year. “Most activities are in the open air and parties continue every day until 8am. By then, activities for the next day are already starting. It really goes on for 24 hours a day,” says Jeroen De Schuyteneer, director of Ghent’s city services. “This all happens without incidents, in a very pleasant mood.”

activities for children, poetry lovers, debate enthusiasts and theatre-goers. This will be the 173rd edition of this amazing tradition. “It started off as an initiative by business owners in Ghent, who thought their workers had too many public holidays. They decided to give them ten days of festivities instead. That plan has clearly failed. People now take the ten days of leave, plus the annual holidays they always used to take,” says De Schuyteneer. www.gentsefeesten.stad.gent

It goes without saying that Gentse Feesten is the biggest event of the year for this city. Every square and park will be used to host more than 3,600 events, organised by over 300 cultural organisations. There are massive concerts attracting thousands of people, but also many

The most eye-catching stage at the Gentse Feesten is without a doubt Polé Polé. It is colourful and set in one of the most beautiful spots in the old inner city of Ghent. From 15 to 24 July, this is where festival-goers can experience a cheerful and energising African, Latin American and Caribbean party. Polé Polé, set along and partly on the Leie River, is actually a festival within a festival. It is

a ten-day tropical party with live bands playing upbeat rhythms and melodies. “We only book bands that bring that summery party vibe,” says organiser Tim Van den Heuvel. “We are looking to create a holiday mood. Polé Polé is pure party music.” It was the mayor of Ghent himself who made sure Polé Polé was included in the Gentse Feesten. Polé Polé – Swahili for ‘take it easy’

– used to be a stand-alone summer party organised by the owner of several tropical bars in various Belgian cities. Nowadays, it is hard to imagine Gentse Feesten without the colourful, high-energy stage set on the Graslei and Korenlei; happy party people dancing on the pontoons in the Leie River; with a backdrop of the marvellous looking, centuries-old buildings in the centre of this lively Belgian city. www.polepole.be