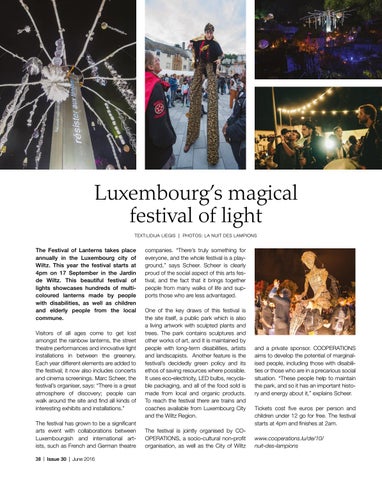 The Festival of Lanterns takes place annually in the Luxembourg city of Wiltz. This year the festival starts at 4pm on 17 September in the Jardin de Wiltz. This beautiful festival of lights showcases hundreds of multicoloured lanterns made by people with disabilities, as well as children and elderly people from the local commune. Visitors of all ages come to get lost amongst the rainbow lanterns, the street theatre performances and innovative light installations in between the greenery. Each year different elements are added to the festival; it now also includes concerts and cinema screenings. Marc Scheer, the festival’s organiser, says: “There is a great atmosphere of discovery; people can walk around the site and find all kinds of interesting exhibits and installations.” The festival has grown to be a significant arts event with collaborations between Luxembourgish and international artists, such as French and German theatre 38 | Issue 30 | June 2016

companies. “There’s truly something for everyone, and the whole festival is a playground,” says Scheer. Scheer is clearly proud of the social aspect of this arts festival, and the fact that it brings together people from many walks of life and supports those who are less advantaged. One of the key draws of this festival is the site itself, a public park which is also a living artwork with sculpted plants and trees. The park contains sculptures and other works of art, and it is maintained by people with long-term disabilities, artists and landscapists. Another feature is the festival’s decidedly green policy and its ethos of saving resources where possible. It uses eco-electricity, LED bulbs, recyclable packaging, and all of the food sold is made from local and organic products. To reach the festival there are trains and coaches available from Luxembourg City and the Wiltz Region. The festival is jointly organised by COOPERATIONS, a socio-cultural non-profit organisation, as well as the City of Wiltz

and a private sponsor. COOPERATIONS aims to develop the potential of marginalised people, including those with disabilities or those who are in a precarious social situation. “These people help to maintain the park, and so it has an important history and energy about it,” explains Scheer. Tickets cost five euros per person and children under 12 go for free. The festival starts at 4pm and finishes at 2am. www.cooperations.lu/de/10/ nuit-des-lampions