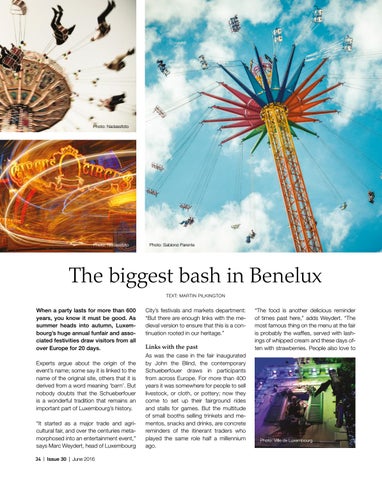 When a party lasts for more than 600 years, you know it must be good. As summer heads into autumn, Luxembourg’s huge annual funfair and associated festivities draw visitors from all over Europe for 20 days. Experts argue about the origin of the event’s name; some say it is linked to the name of the original site, others that it is derived from a word meaning ‘barn’. But nobody doubts that the Schueberfouer is a wonderful tradition that remains an important part of Luxembourg’s history. “It started as a major trade and agricultural fair, and over the centuries metamorphosed into an entertainment event,” says Marc Weydert, head of Luxembourg 34 | Issue 30 | June 2016

City’s festivals and markets department: “But there are enough links with the medieval version to ensure that this is a continuation rooted in our heritage.”

Links with the past As was the case in the fair inaugurated by John the Blind, the contemporary Schueberfouer draws in participants from across Europe. For more than 400 years it was somewhere for people to sell livestock, or cloth, or pottery; now they come to set up their fairground rides and stalls for games. But the multitude of small booths selling trinkets and mementos, snacks and drinks, are concrete reminders of the itinerant traders who played the same role half a millennium ago.

“The food is another delicious reminder of times past here,” adds Weydert. “The most famous thing on the menu at the fair is probably the waffles, served with lashings of whipped cream and these days often with strawberries. People also love to