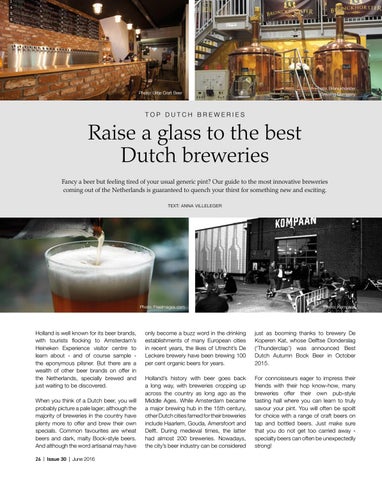 Raise a glass to the best Dutch breweries Fancy a beer but feeling tired of your usual generic pint? Our guide to the most innovative breweries coming out of the Netherlands is guaranteed to quench your thirst for something new and exciting. TEXT: ANNA VILLELEGER

Holland is well known for its beer brands, with tourists flocking to Amsterdam’s Heineken Experience visitor centre to learn about - and of course sample the eponymous pilsner. But there are a wealth of other beer brands on offer in the Netherlands, specially brewed and just waiting to be discovered. When you think of a Dutch beer, you will probably picture a pale lager; although the majority of breweries in the country have plenty more to offer and brew their own specials. Common favourites are wheat beers and dark, malty Bock-style beers. And although the word artisanal may have 26 | Issue 30 | June 2016

only become a buzz word in the drinking establishments of many European cities in recent years, the likes of Utrecht’s De Leckere brewery have been brewing 100 per cent organic beers for years.

Holland’s history with beer goes back a long way, with breweries cropping up across the country as long ago as the Middle Ages. While Amsterdam became a major brewing hub in the 15th century, other Dutch cities famed for their breweries include Haarlem, Gouda, Amersfoort and Delft. During medieval times, the latter had almost 200 breweries. Nowadays, the city’s beer industry can be considered

For connoisseurs eager to impress their friends with their hop know-how, many breweries offer their own pub-style tasting hall where you can learn to truly savour your pint. You will often be spoilt for choice with a range of craft beers on tap and bottled beers. Just make sure that you do not get too carried away specialty beers can often be unexpectedly strong!