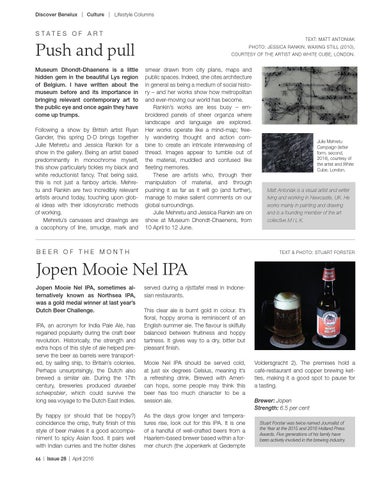 Push and pull Museum Dhondt-Dhaenens is a little hidden gem in the beautiful Lys region of Belgium. I have written about the museum before and its importance in bringing relevant contemporary art to the public eye and once again they have come up trumps. Following a show by British artist Ryan Gander, this spring D-D brings together Julie Mehretu and Jessica Rankin for a show in the gallery. Being an artist based predominantly in monochrome myself, this show particularly tickles my black and white reductionist fancy. That being said, this is not just a fanboy article. Mehretu and Rankin are two incredibly relevant artists around today, touching upon global ideas with their idiosyncratic methods of working. Mehretu’s canvases and drawings are a cacophony of line, smudge, mark and

smear drawn from city plans, maps and public spaces. Indeed, she cites architecture in general as being a medium of social history – and her works show how metropolitan and ever-moving our world has become. Rankin’s works are less busy – embroidered panels of sheer organza where landscape and language are explored. Her works operate like a mind-map; freely wandering thought and action combine to create an intricate interweaving of thread. Images appear to tumble out of the material, muddled and confused like fleeting memories. These are artists who, through their manipulation of material, and through pushing it as far as it will go (and further), manage to make salient comments on our global surroundings. Julie Mehretu and Jessica Rankin are on show at Museum Dhondt-Dhaenens, from 10 April to 12 June.

Jopen Mooie Nel IPA Jopen Mooie Nel IPA, sometimes alternatively known as Northsea IPA, was a gold medal winner at last year’s Dutch Beer Challenge. IPA, an acronym for India Pale Ale, has regained popularity during the craft beer revolution. Historically, the strength and extra hops of this style of ale helped preserve the beer as barrels were transported, by sailing ship, to Britain’s colonies. Perhaps unsurprisingly, the Dutch also brewed a similar ale. During the 17th century, breweries produced duraebel scheepsbier, which could survive the long sea voyage to the Dutch East Indies. By happy (or should that be hoppy?) coincidence the crisp, fruity finish of this style of beer makes it a good accompaniment to spicy Asian food. It pairs well with Indian curries and the hotter dishes 66 | Issue 28 | April 2016

served during a rijsttafel meal in Indonesian restaurants. This clear ale is burnt gold in colour. It’s floral, hoppy aroma is reminiscent of an English summer ale. The flavour is skilfully balanced between fruitiness and hoppy tartness. It gives way to a dry, bitter but pleasant finish. Mooie Nel IPA should be served cold, at just six degrees Celsius, meaning it’s a refreshing drink. Brewed with American hops, some people may think this beer has too much character to be a session ale. As the days grow longer and temperatures rise, look out for this IPA. It is one of a handful of well-crafted beers from a Haarlem-based brewer based within a former church (the Jopenkerk at Gedempte

Voldersgracht 2). The premises hold a café-restaurant and copper brewing kettles, making it a good spot to pause for a tasting. Brewer: Jopen Strength: 6.5 per cent Stuart Forster was twice named Journalist of the Year at the 2015 and 2016 Holland Press Awards. Five generations of his family have been actively involved in the brewing industry.