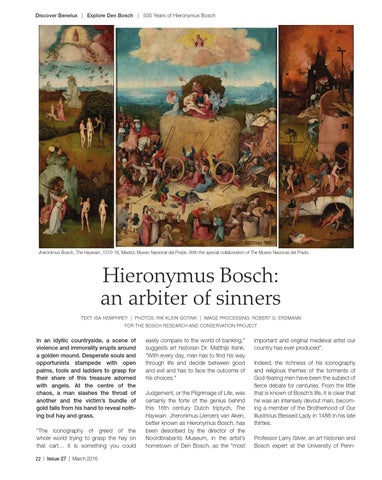 In an idyllic countryside, a scene of violence and immorality erupts around a golden mound. Desperate souls and opportunists stampede with open palms, tools and ladders to grasp for their share of this treasure adorned with angels. At the centre of the chaos, a man slashes the throat of another and the victim’s bundle of gold falls from his hand to reveal nothing but hay and grass. “The iconography of greed of the whole world trying to grasp the hay on that cart… it is something you could 22 | Issue 27 | March 2016

easily compare to the world of banking,” suggests art historian Dr. Matthijs Ilsink. “With every day, man has to find his way through life and decide between good and evil and has to face the outcome of his choices.” Judgement, or the Pilgrimage of Life, was certainly the forte of the genius behind this 16th century Dutch triptych, The Haywain. Jheronimus (Jeroen) van Aken, better known as Hieronymus Bosch, has been described by the director of the Noordbrabants Museum, in the artist’s hometown of Den Bosch, as the “most

important and original medieval artist our country has ever produced”. Indeed, the richness of his iconography and religious themes of the torments of God-fearing men have been the subject of fierce debate for centuries. From the little that is known of Bosch’s life, it is clear that he was an intensely devout man, becoming a member of the Brotherhood of Our Illustrious Blessed Lady in 1488 in his late thirties. Professor Larry Silver, an art historian and Bosch expert at the University of Penn-