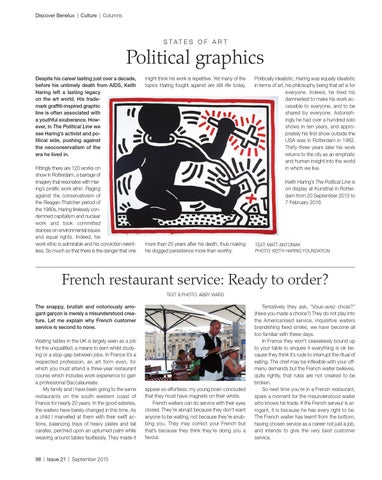 Political graphics Despite his career lasting just over a decade, before his untimely death from AIDS, Keith Haring left a lasting legacy on the art world. His trademark graffiti-inspired graphic line is often associated with a youthful exuberance. However, in The Political Line we see Haring’s activist and political side, pushing against the neoconservatism of the era he lived in. Fittingly there are 120 works on show in Rotterdam, a barrage of imagery that resonates with Haring’s prolific work ethic. Raging against the conservativism of the Reagan-Thatcher period of the 1980s, Haring tirelessly condemned capitalism and nuclear work and took committed stances on environmental issues and equal rights. Indeed, his work ethic is admirable and his conviction relentless. So much so that there is the danger that one

might think his work is repetitive. Yet many of the topics Haring fought against are still rife today,

Politically idealistic, Haring was equally idealistic in terms of art, his philosophy being that art is for everyone. Indeed, he tried his damnedest to make his work accessible to everyone, and to be shared by everyone. Astonishingly he had over a hundred solo shows in ten years, and appropriately his first show outside the USA was in Rotterdam in 1982. Thirty-three years later his work returns to the city as an emphatic and human insight into the world in which we live. Keith Haring’s The Political Line is on display at Kunsthal in Rotterdam from 20 September 2015 to 7 February 2016.

more than 25 years after his death, thus making his dogged persistence more than worthy.

The snappy, brutish and notoriously arrogant garçon is merely a misunderstood creature. Let me explain why French customer service is second to none. Waiting tables in the UK is largely seen as a job for the unqualified, a means to earn whilst studying or a stop-gap between jobs. In France it’s a respected profession, an art form even, for which you must attend a three-year restaurant course which includes work experience to gain a professional Baccalaureate. My family and I have been going to the same restaurants on the south western coast of France for nearly 20 years. In the good eateries, the waiters have barely changed in this time. As a child I marvelled at them with their swift actions, balancing trays of heavy plates and tall carafes, perched upon an upturned palm while weaving around tables faultlessly. They made it

appear so effortless; my young brain concluded that they must have magnets on their wrists. French waiters can do service with their eyes closed. They’re abrupt because they don’t want anyone to be waiting, not because they’re snubbing you. They may correct your French but that’s because they think they’re doing you a favour.

Tentatively they ask, “Vous-avez choisi?” (Have you made a choice?) They do not play into the Americanised service, inquisitive waiters brandishing fixed smiles, we have become all too familiar with these days. In France they won’t ceaselessly bound up to your table to enquire if everything is ok because they think it’s rude to interrupt the ritual of eating. The chef may be inflexible with your offmenu demands but the French waiter believes, quite rightly, that rules are not created to be broken. So next time you’re in a French restaurant, spare a moment for the misunderstood waiter who knows his trade. If the French serveur is arrogant, it is because he has every right to be. The French waiter has learnt from the bottom, having chosen service as a career not just a job, and intends to give the very best customer service.