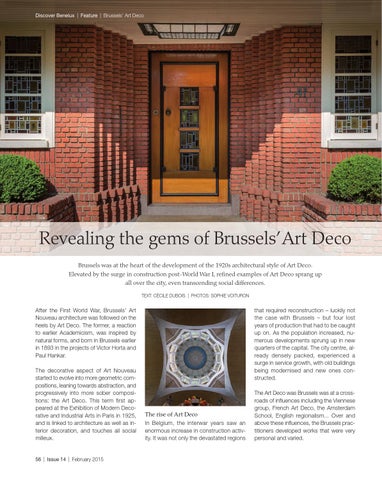 Revealing the gems of Brussels’ Art Deco Brussels was at the heart of the development of the 1920s architectural style of Art Deco. Elevated by the surge in construction post-World War I, refined examples of Art Deco sprang up all over the city, even transcending social differences. TEXT: CéCILE DUBOIS  |  PHOTOS: SOPHIE VOITURON

that required reconstruction – luckily not the  case  with  Brussels  –  but  four  lost years of production that had to be caught up on. As the population increased, numerous developments sprung up in new quarters of the capital. The city centre, already  densely  packed,  experienced  a surge in service growth, with old buildings being  modernised  and  new  ones  constructed.

After  the  First  World  War,  Brussels’  Art Nouveau architecture was followed on the heels by Art Deco. The former, a reaction to  earlier  Academicism,  was  inspired  by natural forms, and born in Brussels earlier in 1893 in the projects of Victor Horta and Paul Hankar. The  decorative  aspect  of  Art  Nouveau started to evolve into more geometric compositions, leaning towards abstraction, and progressively  into  more  sober  compositions:  the  Art  Deco.  This  term  first  appeared at the Exhibition of Modern Decorative and Industrial Arts in Paris in 1925, and is linked to architecture as well as interior  decoration,  and  touches  all  social milieux.

The rise of Art Deco In  Belgium,  the  interwar  years  saw  an enormous increase in construction activity. It was not only the devastated regions

The Art Deco was Brussels was at a crossroads of influences including the Viennese group,  French  Art  Deco,  the  Amsterdam School,  English  regionalism...  Over  and above these influences, the Brussels practitioners  developed  works  that  were  very personal and varied.