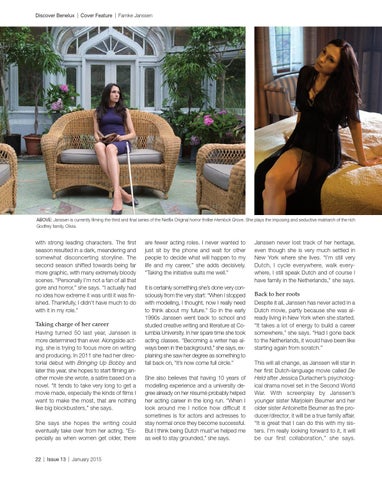 ABOVE: Janssen is currently filming the third and final series of the Netflix Original horror thriller Hemlock Grove. She plays the imposing and seductive matriarch of the rich Godfrey family, Olivia.

with strong leading characters. The first season resulted in a dark, meandering and somewhat disconcerting storyline. The second season shifted towards being far more graphic, with many extremely bloody scenes. “Personally I’m not a fan of all that gore and horror,” she says. “I actually had no idea how extreme it was until it was finished. Thankfully, I didn’t have much to do with it in my role.”

Taking charge of her career Having turned 50 last year, Janssen is more determined than ever. Alongside acting, she is trying to focus more on writing and producing. In 2011 she had her directorial debut with Bringing Up Bobby and later this year, she hopes to start filming another movie she wrote, a satire based on a novel. “It tends to take very long to get a movie made, especially the kinds of films I want to make the most, that are nothing like big blockbusters,” she says. She says she hopes the writing could eventually take over from her acting. “Especially as when women get older, there

are fewer acting roles. I never wanted to just sit by the phone and wait for other people to decide what will happen to my life and my career,” she adds decisively. “Taking the initiative suits me well.” It is certainly something she’s done very consciously from the very start: “When I stopped with modelling, I thought, now I really need to think about my future.” So in the early 1990s Janssen went back to school and studied creative writing and literature at Columbia University. In her spare time she took acting classes. “Becoming a writer has always been in the background,” she says, explaining she saw her degree as something to fall back on, “it’s now come full circle.” She also believes that having 10 years of modelling experience and a university degree already on her résumé probably helped her acting career in the long run. “When I look around me I notice how difficult it sometimes is for actors and actresses to stay normal once they become successful. But I think being Dutch must’ve helped me as well to stay grounded,” she says.

Janssen never lost track of her heritage, even though she is very much settled in New York where she lives. “I’m still very Dutch, I cycle everywhere, walk everywhere, I still speak Dutch and of course I have family in the Netherlands,” she says.

Back to her roots Despite it all, Janssen has never acted in a Dutch movie, partly because she was already living in New York when she started. “It takes a lot of energy to build a career somewhere,” she says. “Had I gone back to the Netherlands, it would have been like starting again from scratch.” This will all change, as Janssen will star in her first Dutch-language movie called De Held after Jessica Durlacher’s psychological drama novel set in the Second World War. With screenplay by Janssen’s younger sister Marjolein Beumer and her older sister Antoinette Beumer as the producer/director, it will be a true family affair. “It is great that I can do this with my sisters. I’m really looking forward to it, it will be our first collaboration,” she says.