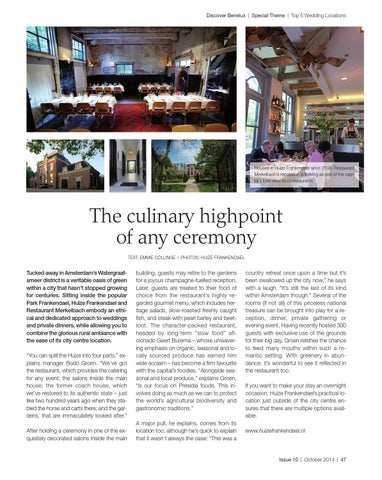 Housed in Huize Frankendael since 2008, Restaurant Merkelbach’s reputation is thriving as one of the capital’s best slow food restaurants.

Tucked away in Amsterdam’s Watergraafsmeer district is a veritable oasis of green within a city that hasn’t stopped growing for centuries. Sitting inside the popular Park Frankendael, Huize Frankendael and Restaurant Merkelbach embody an ethical and dedicated approach to weddings and private dinners, while allowing you to combine the glorious rural ambiance with the ease of its city centre location. “You can split the Huize into four parts,” explains manager Bodo Groen. “We’ve got the restaurant, which provides the catering for any event; the salons inside the main house; the former coach house, which we’ve restored to its authentic state – just like two hundred years ago when they stabled the horse and carts there; and the gardens, that are immaculately looked after.” After holding a ceremony in one of the exquisitely decorated salons inside the main

building, guests may retire to the gardens for a joyous champagne-fuelled reception. Later, guests are treated to their food of choice from the restaurant’s highly regarded gourmet menu, which includes heritage salads, slow-roasted freshly caught fish, and steak with pearl barley and beetroot. The character-packed restaurant, headed by long-term “slow food” aficionado Geert Burema – whose unwavering emphasis on organic, seasonal and locally sourced produce has earned him wide acclaim – has become a firm favourite with the capital’s foodies. “Alongside seasonal and local produce,” explains Groen, “is our focus on Presidia foods. This involves doing as much as we can to protect the world’s agricultural biodiversity and gastronomic traditions.” A major pull, he explains, comes from its location too, although he’s quick to explain that it wasn’t always the case: “This was a

country retreat once upon a time but it’s been swallowed up the city now,” he says with a laugh. “It’s still the last of its kind within Amsterdam though.” Several of the rooms (if not all) of this priceless national treasure can be brought into play for a reception, dinner, private gathering or evening event. Having recently hosted 300 guests with exclusive use of the grounds for their big day, Groen relishes the chance to feed many mouths within such a romantic setting. With greenery in abundance, it’s wonderful to see it reflected in the restaurant too. If you want to make your stay an overnight occasion, Huize Frankendael’s practical location just outside of the city centre ensures that there are multiple options available. www.huizefrankendael.nl