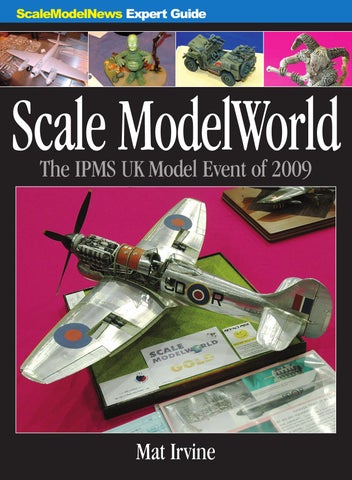 Welcome to IPMS Scale ModelWorld The UK branch of the IPMS (International Plastic Modellers Society) holds its annual National Meeting every November. In recent years this has been at the International Conference Centre in Telford. The ICC is large and has two main halls. There is also a slightly smaller one beside the entrance and food concessions, and this was used for the Competition Area. The main halls were packed with trading stalls and club stands, which incorporated the SIGs (Special Interest Groups) the ‘Interests’ of which range from the Korean War, through Seaplanes and NASA, and on to Wallace &amp; Gromit. Here is a taster of the IPMS weekend, and with one of the areas being devoted to regional foods brought in by our cousins from Continental Europe, Mat Irvine the show was literally that, a taster!

Above The Show’s second day was Remembrance Sunday, when the traditional two minute silence was held.

Right I ran my own stand for much of the time, taking a break from this for judging and speaking duties.

Above A test shot of the Airfix 1:24 scale de Havilland Mosquito, one of the most anticipated kits ever.

Above Impressive box-art for the initial version of the Airfix 1:24 scale Mosquito, here depicted on a World War II bombing raid.

Above Trevor Snowden, Product Manager and one of the driving forces behind Airfix since the Humbrol days, talks kits with a customer.

Above Wallace &amp; Gromit â&amp;#x20AC;&amp;#x201C; just one of the many adaptations of the Airfix kits using Aardman characters, here with some mini-Aliens.

Above The Simpsons donâ&amp;#x20AC;&amp;#x2122;t get left out, with this scaly modification of the Homer kit produced by Heller.

Above A War of the Worlds diorama using 00/H0 scale buildings and accessories, plus a scratch-built Martian fighting machine.

Above One of the many SIGs â&amp;#x20AC;&amp;#x201C; this one an impressive 1:72 scale display, featuring Australasian aerobatic team aircraft.

Above The Airfix Tribute Forum SIG displayed a range of models across the companyâ&amp;#x20AC;&amp;#x2122;s half-century history.

Above Splash, the Seaplane/Floatplane SIG, featured a range of beautifully made aircraft from the Golden Age of flying boats, the 1930s.

Above The Korean War SIG concentrates on the first major post-World War II conflict, when MiG vs. Sabre dogfights were common.

Above The new SIG, Biggles goes to Telford, featured models of aircraft associated with the adventure stories of Captain WE Johns.

Above One of the main displays on the Biggles SIG, a nicely built Bristol Beaufighter, finished in special storybook markings.

Above The Custom Car and Hot Rod SIG put on a colourful display of mostly US designs.

Above The Rocketplanes and SpacePlanes display by Phil Mills showed some interesting birds â&amp;#x20AC;&amp;#x201C; just look at that Skylon in the foreground.

Above The NASA SIG was packed with well-presented material for the space buff, from astronauts to helicopters.

Above These larger military figures include a beautifully painted (and rare) kit, the Airfix Black Prince. Note the separate jousting helm.

Above More lunacy from the Wallace &amp; Gromit SIG. Here, two of the three naughty pigs meet a modified Doctor Who TARDIS.

Above This table of the IPMS Cleveland display concentrated mainly on a wide variety of neatly-made AFVs.

Above Close-up on one of IPMS Cleveland’s models, a 1:25 scale diorama of a scene from the Gerry Anderson series ‘Captain Scarlet’.

Above The competition included these interesting ‘Factual Space’ entries. Unfortunately, we never seem to have many in this category.

Above Best in the Space/SF/fantasy categories was this detailed figure of the Greek deity Pan, complete with pipe.

Above The overall winner in the aircraft category was this World War I era Caudron G4, built by Konstantinos Patsaros.

Above Having a long neck does come in useful... this imaginative diorama in the Junior section used the Tamiya Brachiosaurus kit.

Top Well-known aircraft modeller Alan Clark, with his superb scratch-built Hawker Typhoon. The aircraft is also shown on the front cover. Above left The Me 262 Flying Banana showed off a lighter (and tastier) side of modelling. Above right In the foreground, a show-winning 1:12 scale Tamiya Tyrrell F1 racing car. Behind are a Lancia Stratos and 1930s Bentley.

The UK IPMS Nationals at Telford, by Mat Irvine. Pictures and text of the models and dioramas on display at the International Plastic Modellers Society major event.