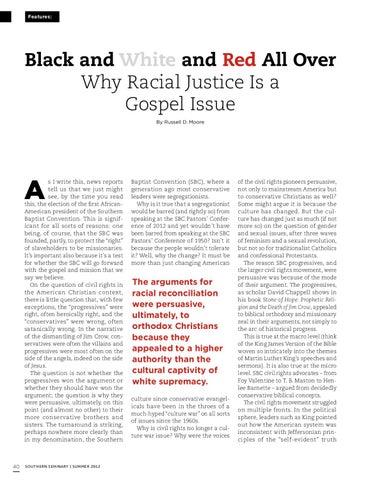 Black and White and Red All Over Why Racial Justice Is a Gospel Issue By Russell D. Moore

s I write this, news reports tell us that we just might see, by the time you read this, the election of the first AfricanAmerican president of the Southern Baptist Convention. This is significant for all sorts of reasons: one being, of course, that the SBC was founded, partly, to protect the “right” of slaveholders to be missionaries. It’s important also because it’s a test for whether the SBC will go forward with the gospel and mission that we say we believe. On the question of civil rights in the American Christian context, there is little question that, with few exceptions, the “progressives” were right, often heroically right, and the “conservatives” were wrong, often satanically wrong. In the narrative of the dismantling of Jim Crow, conservatives were often the villains and progressives were most often on the side of the angels, indeed on the side of Jesus. The question is not whether the progressives won the argument or whether they should have won the argument; the question is why they were persuasive, ultimately, on this point (and almost no other) to their more conservative brothers and sisters. The turnaround is striking, perhaps nowhere more clearly than in my denomination, the Southern

The arguments for racial reconciliation were persuasive, ultimately, to orthodox Christians because they appealed to a higher authority than the cultural captivity of white supremacy. culture since conservative evangelicals have been in the throes of a much-hyped “culture war” on all sorts of issues since the 1960s. Why is civil rights no longer a culture war issue? Why were the voices

of the civil rights pioneers persuasive, not only to mainstream America but to conservative Christians as well? Some might argue it is because the culture has changed. But the culture has changed just as much (if not more so) on the question of gender and sexual issues, after three waves of feminism and a sexual revolution, but not so for traditionalist Catholics and confessional Protestants. The reason SBC progressives, and the larger civil rights movement, were persuasive was because of the mode of their argument. The progressives, as scholar David Chappell shows in his book Stone of Hope: Prophetic Religion and the Death of Jim Crow, appealed to biblical orthodoxy and missionary zeal in their arguments, not simply to the arc of historical progress. This is true at the macro level (think of the King James Version of the Bible woven so intricately into the themes of Martin Luther King’s speeches and sermons). It is also true at the micro level. SBC civil rights advocates – from Foy Valentine to T. B. Maston to Henlee Barnette – argued from decidedly conservative biblical concepts. The civil rights movement struggled on multiple fronts. In the political sphere, leaders such as King pointed out how the American system was inconsistent with Jeffersonian principles of the “self-evident” truth

The Quarterly Magazine of The Southern Baptist Theological Seminary 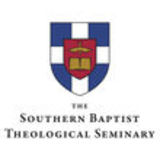