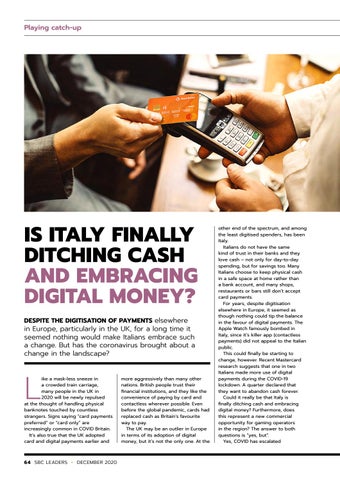 IS ITALY FINALLY DITCHING CASH AND EMBRACING DIGITAL MONEY? DESPITE THE DIGITISATION OF PAYMENTS elsewhere

in Europe, particularly in the UK, for a long time it seemed nothing would make Italians embrace such a change. But has the coronavirus brought about a change in the landscape?

ike a mask-less sneeze in a crowded train carriage, many people in the UK in 2020 will be newly repulsed at the thought of handling physical banknotes touched by countless strangers. Signs saying “card payments preferred” or “card only” are increasingly common in COVID Britain. It’s also true that the UK adopted card and digital payments earlier and

more aggressively than many other nations. British people trust their financial institutions, and they like the convenience of paying by card and contactless wherever possible. Even before the global pandemic, cards had replaced cash as Britain’s favourite way to pay. The UK may be an outlier in Europe in terms of its adoption of digital money, but it’s not the only one. At the

other end of the spectrum, and among the least digitised spenders, has been Italy. Italians do not have the same kind of trust in their banks and they love cash – not only for day-to-day spending, but for savings too. Many Italians choose to keep physical cash in a safe space at home rather than a bank account, and many shops, restaurants or bars still don’t accept card payments. For years, despite digitisation elsewhere in Europe, it seemed as though nothing could tip the balance in the favour of digital payments. The Apple Watch famously bombed in Italy, since it’s killer app (contactless payments) did not appeal to the Italian public. This could finally be starting to change, however. Recent Mastercard research suggests that one in two Italians made more use of digital payments during the COVID-19 lockdown. A quarter declared that they want to abandon cash forever. Could it really be that Italy is finally ditching cash and embracing digital money? Furthermore, does this represent a new commercial opportunity for gaming operators in the region? The answer to both questions is “yes, but”. Yes, COVID has escalated