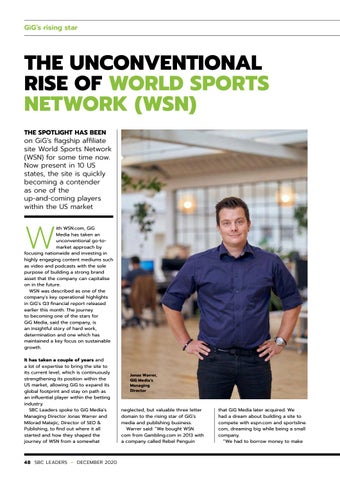 on GiG’s flagship affiliate site World Sports Network (WSN) for some time now. Now present in 10 US states, the site is quickly becoming a contender as one of the up-and-coming players within the US market

ith WSN.com, GiG Media has taken an unconventional go-tomarket approach by focusing nationwide and investing in highly engaging content mediums such as video and podcasts with the sole purpose of building a strong brand asset that the company can capitalise on in the future. WSN was described as one of the company's key operational highlights in GiG’s Q3 financial report released earlier this month. The journey to becoming one of the stars for GiG Media, said the company, is an insightful story of hard work, determination and one which has maintained a key focus on sustainable growth. It has taken a couple of years and a lot of expertise to bring the site to its current level, which is continuously strengthening its position within the US market, allowing GiG to expand its global footprint and stay on path as an influential player within the betting industry. SBC Leaders spoke to GiG Media’s Managing Director Jonas Warrer and Milorad Matejic, Director of SEO & Publishing, to find out where it all started and how they shaped the journey of WSN from a somewhat

neglected, but valuable three letter domain to the rising star of GiG’s media and publishing business. Warrer said: “We bought WSN. com from Gambling.com in 2013 with a company called Rebel Penguin

that GiG Media later acquired. We had a dream about building a site to compete with espn.com and sportsline. com, dreaming big while being a small company. “We had to borrow money to make