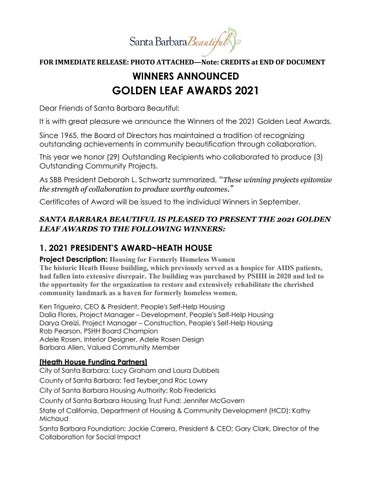 FOR IMMEDIATE RELEASE: PHOTO ATTACHED—Note: CREDITS at END OF DOCUMENT

GOLDEN LEAF AWARDS 2021 Dear Friends of Santa Barbara Beautiful: It is with great pleasure we announce the Winners of the 2021 Golden Leaf Awards. Since 1965, the Board of Directors has maintained a tradition of recognizing outstanding achievements in community beautification through collaboration. This year we honor (29) Outstanding Recipients who collaborated to produce (3) Outstanding Community Projects. As SBB President Deborah L. Schwartz summarized, “These winning projects epitomize the strength of collaboration to produce worthy outcomes.” Certificates of Award will be issued to the individual Winners in September. SANTA BARBARA BEAUTIFUL IS PLEASED TO PRESENT THE 2021 GOLDEN LEAF AWARDS TO THE FOLLOWING WINNERS:

3. NAME OF WINNING PROJECT: POETRY WITH WINGS ! Project Description: In honor of Poetry Month &amp; Earth Day this Spring 3rd, 4th and 6th graders in Santa Barbara created poetry and art to bring attention to the plight of the monarch butterflies. 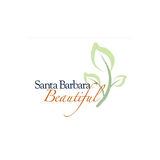