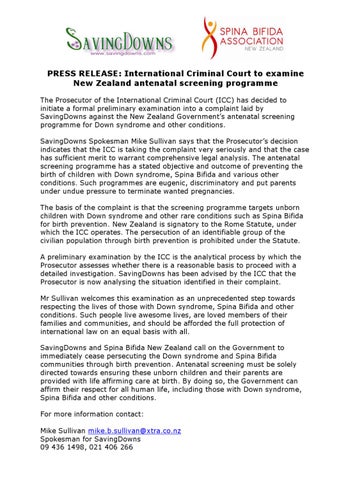 PRESS RELEASE: International Criminal Court to examine New Zealand antenatal screening programme The Prosecutor of the International Criminal Court (ICC) has decided to initiate a formal preliminary examination into a complaint laid by SavingDowns against the New Zealand Governmentâ&#x20AC;&#x2122;s antenatal screening programme for Down syndrome and other conditions. SavingDowns Spokesman Mike Sullivan says that the Prosecutorâ&#x20AC;&#x2122;s decision indicates that the ICC is taking the complaint very seriously and that the case has sufficient merit to warrant comprehensive legal analysis. The antenatal screening programme has a stated objective and outcome of preventing the birth of children with Down syndrome, Spina Bifida and various other conditions. Such programmes are eugenic, discriminatory and put parents under undue pressure to terminate wanted pregnancies. The basis of the complaint is that the screening programme targets unborn children with Down syndrome and other rare conditions such as Spina Bifida for birth prevention. New Zealand is signatory to the Rome Statute, under which the ICC operates. The persecution of an identifiable group of the civilian population through birth prevention is prohibited under the Statute. A preliminary examination by the ICC is the analytical process by which the Prosecutor assesses whether there is a reasonable basis to proceed with a detailed investigation. SavingDowns has been advised by the ICC that the Prosecutor is now analysing the situation identified in their complaint. Mr Sullivan welcomes this examination as an unprecedented step towards respecting the lives of those with Down syndrome, Spina Bifida and other conditions. Such people live awesome lives, are loved members of their families and communities, and should be afforded the full protection of international law on an equal basis with all. SavingDowns and Spina Bifida New Zealand call on the Government to immediately cease persecuting the Down syndrome and Spina Bifida communities through birth prevention. Antenatal screening must be solely directed towards ensuring these unborn children and their parents are provided with life affirming care at birth. By doing so, the Government can affirm their respect for all human life, including those with Down syndrome, Spina Bifida and other conditions. For more information contact: Mike Sullivan mike.b.sullivan@xtra.co.nz Spokesman for SavingDowns 09 436 1498, 021 406 266 The Prosecutor of the International Criminal Court (ICC) has decided to initiate a formal preliminary examination into a complaint laid by S...

The Prosecutor of the International Criminal Court (ICC) has decided to initiate a formal preliminary examination into a complaint laid by S...