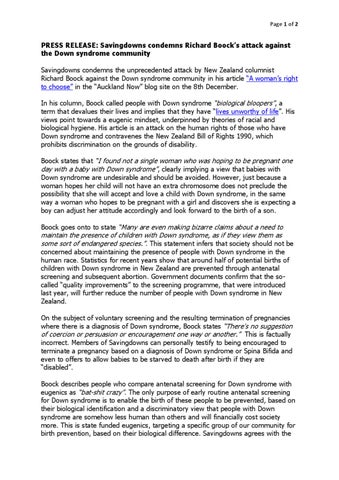 PRESS RELEASE: Savingdowns condemns Richard Boock’s attack against the Down syndrome community Savingdowns condemns the unprecedented attack by New Zealand columnist Richard Boock against the Down syndrome community in his article “A woman’s right to choose” in the “Auckland Now” blog site on the 8th December. In his column, Boock called people with Down syndrome “biological bloopers”, a term that devalues their lives and implies that they have “lives unworthy of life”. His views point towards a eugenic mindset, underpinned by theories of racial and biological hygiene. His article is an attack on the human rights of those who have Down syndrome and contravenes the New Zealand Bill of Rights 1990, which prohibits discrimination on the grounds of disability. Boock states that “I found not a single woman who was hoping to be pregnant one day with a baby with Down syndrome”, clearly implying a view that babies with Down syndrome are undesirable and should be avoided. However, just because a woman hopes her child will not have an extra chromosome does not preclude the possibility that she will accept and love a child with Down syndrome, in the same way a woman who hopes to be pregnant with a girl and discovers she is expecting a boy can adjust her attitude accordingly and look forward to the birth of a son. Boock goes onto to state “Many are even making bizarre claims about a need to

On the subject of voluntary screening and the resulting termination of pregnancies where there is a diagnosis of Down syndrome, Boock states “There&#39;s no suggestion of coercion or persuasion or encouragement one way or another.” This is factually incorrect. Members of Savingdowns can personally testify to being encouraged to terminate a pregnancy based on a diagnosis of Down syndrome or Spina Bifida and even to offers to allow babies to be starved to death after birth if they are “disabled”. Boock describes people who compare antenatal screening for Down syndrome with eugenics as “bat-shit crazy”. The only purpose of early routine antenatal screening for Down syndrome is to enable the birth of these people to be prevented, based on their biological identification and a discriminatory view that people with Down syndrome are somehow less human than others and will financially cost society more. This is state funded eugenics, targeting a specific group of our community for birth prevention, based on their biological difference. Savingdowns agrees with the

National Down Syndrome Congress’ official statement, &quot;... the NDSC is concerned about first trimester tests, as the primary reason for them is to facilitate early terminations. Other reasons for prenatal diagnosis, such as hospital selection and delivery management, do not require first trimester testing. “ Savingdowns spokesman, Mike Sullivan, is the father of three-year-old Rebecca Sullivan who has Down syndrome. He said people with Down syndrome and other disabilities are human beings who live full and rewarding lives. “They must be treated on an equal basis with other members of our society, without any form of discrimination.&#39;&#39; On the issue of screening programmes, he said “The use of later term screening to enable safe birth outcomes and to support parent’s preparation is an appropriate use of technology. Early screening to prevent births is eugenics, resulting in a biological genocide against our community.” Savingdowns is an advocacy group of parents and siblings of children with Down syndrome, who oppose discrimination against the Down syndrome community. We oppose the targeted persecution of our community through a screening programme specifically structured to identify and prevent the birth of children because they happen to have Down syndrome. Since Down syndrome usually occurs randomly and is not usually genetically inheritable, it can only be detected after a baby has been conceived, and one cannot eliminate the extra chromosome contained in every cell without also killing the child. Savingdowns and Right to Life NZ Inc have a case lodged with the International Criminal Court against the New Zealand government for breaches of the Treaty of Rome. The basis of the case is that the current antenatal screening programme for Down syndrome persecutes an identifiable group of the civilian population through birth prevention. The case is currently under further analysis by the court. For further information contact: Mike Sullivan, 09 436 1498 or 021 406 266 mike.b.sullivan@xtra.co.nz www.savingdowns.com Conservationists for Down syndrome Savingdowns.com on Facebook

Savingdowns condemns Richard Boock’s attack against the Down syndrome community