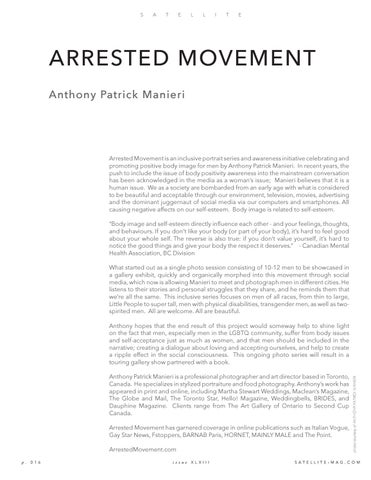 Arrested Movement is an inclusive portrait series and awareness initiative celebrating and promoting positive body image for men by Anthony Patrick Manieri. In recent years, the push to include the issue of body positivity awareness into the mainstream conversation has been acknowledged in the media as a woman’s issue; Manieri believes that it is a human issue. We as a society are bombarded from an early age with what is considered to be beautiful and acceptable through our environment, television, movies, advertising and the dominant juggernaut of social media via our computers and smartphones. All causing negative affects on our self-esteem. Body image is related to self-esteem. “Body image and self-esteem directly influence each other - and your feelings, thoughts, and behaviours. If you don’t like your body (or part of your body), it’s hard to feel good about your whole self. The reverse is also true: if you don’t value yourself, it’s hard to notice the good things and give your body the respect it deserves.” - Canadian Mental Health Association, BC Division What started out as a single photo session consisting of 10-12 men to be showcased in a gallery exhibit, quickly and organically morphed into this movement through social media, which now is allowing Manieri to meet and photograph men in different cities. He listens to their stories and personal struggles that they share, and he reminds them that we’re all the same. This inclusive series focuses on men of all races, from thin to large, Little People to super tall, men with physical disabilities, transgender men, as well as twospirited men. All are welcome. All are beautiful.

Anthony hopes that the end result of this project would someway help to shine light on the fact that men, especially men in the LGBTQ community, suffer from body issues and self-acceptance just as much as women, and that men should be included in the narrative; creating a dialogue about loving and accepting ourselves, and help to create a ripple effect in the social consciousness. This ongoing photo series will result in a touring gallery show partnered with a book. 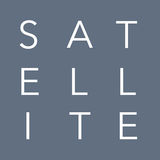