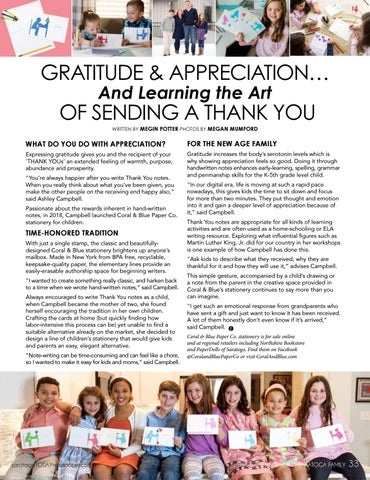 GRATITUDE & APPRECIATION… And Learning the Art

WHAT DO YOU DO WITH APPRECIATION?

FOR THE NEW AGE FAMILY

Expressing gratitude gives you and the recipient of your 'THANK YOUs’ an extended feeling of warmth, purpose, abundance and prosperity.

Gratitude increases the body’s serotonin levels which is why showing appreciation feels so good. Doing it through handwritten notes enhances early-learning, spelling, grammar and penmanship skills for the K-5th grade level child.

"You’re always happier after you write Thank You notes. When you really think about what you’ve been given, you make the other people on the receiving end happy also,” said Ashley Campbell. Passionate about the rewards inherent in hand-written notes, in 2018, Campbell launched Coral & Blue Paper Co. stationery for children.

TIME-HONORED TRADITION With just a single stamp, the classic and beautifullydesigned Coral & Blue stationery brightens up anyone’s mailbox. Made in New York from BPA free, recyclable, keepsake-quality paper, the elementary lines provide an easily-erasable authorship space for beginning writers. "I wanted to create something really classic, and harken back to a time when we wrote hand-written notes,” said Campbell. Always encouraged to write Thank You notes as a child, when Campbell became the mother of two, she found herself encouraging the tradition in her own children. Crafting the cards at home (but quickly finding how labor-intensive this process can be) yet unable to find a suitable alternative already on the market, she decided to design a line of children’s stationery that would give kids and parents an easy, elegant alternative. "Note-writing can be time-consuming and can feel like a chore, so I wanted to make it easy for kids and moms,” said Campbell.

"In our digital era, life is moving at such a rapid pace nowadays, this gives kids the time to sit down and focus for more than two minutes. They put thought and emotion into it and gain a deeper level of appreciation because of it,” said Campbell. Thank You notes are appropriate for all kinds of learning activities and are often used as a home-schooling or ELA writing resource. Exploring what influential figures such as Martin Luther King, Jr. did for our country in her workshops is one example of how Campbell has done this. "Ask kids to describe what they received, why they are thankful for it and how they will use it,” advises Campbell. This simple gesture, accompanied by a child’s drawing or a note from the parent in the creative space provided in Coral & Blue’s stationery continues to say more than you can imagine. "I get such an emotional response from grandparents who have sent a gift and just want to know it has been received. A lot of them honestly don’t even know if it’s arrived,” said Campbell. f Coral & Blue Paper Co. stationery is for sale online and at regional retailers including Northshire Bookstore and PaperDolls of Saratoga. Find them on Facebook @CoralandBluePaperCo or visit CoralAndBlue.com

Check out our new two-sided, flip magazine! We’ve combined two of our popular niche publications to offer you everything you need to care fo...

Check out our new two-sided, flip magazine! We’ve combined two of our popular niche publications to offer you everything you need to care fo...