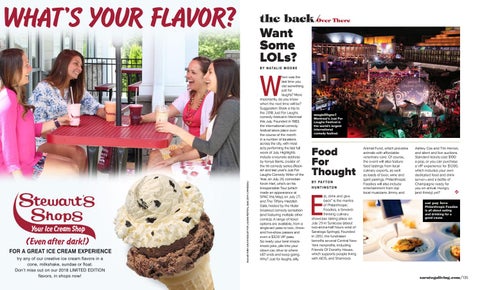 the back Over ⁄ There

(Even after dark!) FOR A GREAT ICE CREAM EXPERIENCE try any of our creative ice cream flavors in a cone, milkshake, sundae or float. Don’t miss out on our 2018 LIMITED EDITION flavors, in shops now!

BY N ATA L I E M O O R E hen was the last time you did something just for laughs? More importantly, do you know when the next time will be? Suggestion: Book a trip to the 2018 Just For Laughs comedy festival in Montréal this July. Founded in 1983, the international comedy festival takes place over the course of the month in a number of locations across the city, with most acts performing the last full week of July. Highlights include a keynote address by Kenya Barris, creator of the hit comedy series Blackish and last year’s Just For Laughs Comedy Writer of the Year, on July 26; comedian Kevin Hart, who’s on his Irresponsible Tour (which made an appearance at SPAC this May), on July 27; and The Tiffany Haddish Gala, hosted by the titular breakout comedy sensation (and featuring multiple other comics). A range of ticket options are available, from a single-act pass to two-, threeand five-show passes and even a $320 VIP pass. So ready your best knockknock joke, pile into your clown car, drive to where I-87 ends and keep going. Why? Just for laughs, silly.

at, drink and give back” is the mantra of Philanthropic Foodies, a forwardthinking culinary showcase taking place on July 29 in Syracuse (about two-and-a-half hours west of Saratoga Springs). Founded in 2012, the fundraiser benefits several Central New York nonprofits, including Friends Of Dorothy House, which supports people living with AIDS, and Shamrock

Animal Fund, which provides animals with affordable veterinary care. Of course, the event will also feature food tastings from local culinary experts, as well as loads of beer, wine and spirit pairings. Philanthropic Foodies will also include entertainment from top local musicians Jimmy and

Ashley Cox and Tim Herron, and silent and live auctions. Standard tickets cost $100 a pop, or you can purchase a VIP experience for $1200, which includes your own dedicated food and drink server—and a bottle of Champagne ready for you on arrival. Hungry (and thirsty) yet? eat pay love Philanthropic Foodies is all about eating and drinking for a good cause. 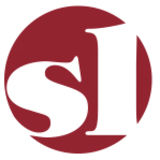