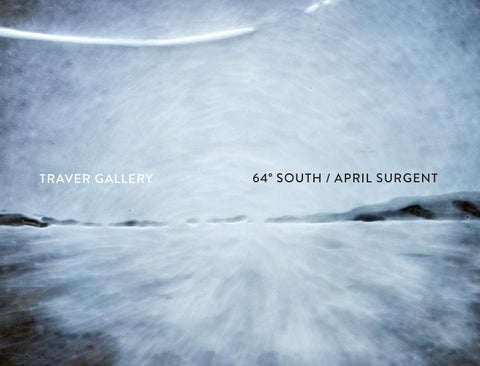 It is our pleasure to introduce 64Â° South, April Surgentâ&amp;#x20AC;&amp;#x2122;s first exhibition with Traver Gallery. A spirit of experimentation, one foot in the past and one in the future, has set Surgent apart as a glass artist. Her intensive and centuries-old process and her passion for investigating and understanding our contemporary environments come together in this most recent body of work, depicting a compelling portrait of the ice-covered, stark, and changing landscape of Antarctica. The result of eight weeks of study at Palmer Station, this new body of work is a portrait of a specific place and a moment in time, but it is also poetry. Surgentâ&amp;#x20AC;&amp;#x2122;s ability to convey meaning beyond the image itself is extraordinary. Her use of light, contrast, and scale tell a story of personal experience; it is at once lonely, awe-inspiring, and eerie, contemplative, and humbling. We are thrilled to present this important exhibition of new works by Seattle-based artist April Surgent.

B CARDINAL DIREC TION OF THE CROWS NEST

SELF PORTRAIT AT HIGH L ATITUDE

NINE SUNRISES OVER THE CARPENTRY SHOP

ON THE NAVIGATION OF NEUM AYER CHANNEL

G THE UNASSUMING NATURE OF SCIENCE

64° South is the result of eight weeks of fieldwork I conducted in the Antarctic during the Austral Summer of 2013, as a recipient of the National Science Foundation’s Antarctic Artist and Writers program. This NSF program affords artists and writers of all descriptions the opportunity to do supported fieldwork at one of three U.S. year-round Antarctic research stations. I had the distinct privilege of working at Palmer station, located on Anvers Island to the west of the Antarctic Peninsula at 64°46’ S, 64°03’ W. My time there was spent observing and recording the surrounding environs and considering scientific research in a place not intended for mankind. The human connection to the world around us is both the inspiration that supports my work and the reason I found myself in Antarctica. As new technologies speed up the pace of life and as the World as we know it begins to change before our eyes, I feel compelled to make tangible records of the things that I see and experience from my daily routines to my extended travels. Much of my work has focused on my observations of the familiar city streets we recognize by smell or the countryside we intimately know every valley of. The opportunity to travel to Antarctica has provided me with the chance to speak about our connection to the unfamiliar world around us. The one we don’t intimately know but should perhaps be more aware of in the global era we now live in.

Even in an age when we think of the world as being, ‘conquered’, quietly settled on the bottom of the earth, Antarctica is a place wholly unknown and misunderstood by most. Jovially referred to by the denizens as ‘the Ice’, Antarctica has the potential to generate significant impacts on the rest of the world, from the advanced scientific research taking place there, to the changing climate that has been notably observed. Works made in response to my experiences at Palmer station aim to convey a new understanding of and bring awareness to the World’s southern most Continent. While the range of resource materials I gathered in Antarctica are vast, 64° South is a reflection of my first impressions of being on the Ice. It was both the light and obviously out of place presence of the station amid the pristine landscape of the Antarctic that first caught my attention. Endless days melted together and any ideas I previously had about time held no ground there. The summer’s omnipresent sun shone down on a snow-covered land and seascape as the station bustled with scientific activity aimed at furthering our understanding of the world around us. While this work specifically addresses my first impressions of the most unfamiliar place, like that of the work of the scientists, it is also an effort that speaks to the immensity of trying to understand something bigger than ourselves.

The Drake Passage is the only place on earth

where the wind can travel all the way around the world

without ever touching land.

The most spectacular part of the voyage was through Neumayer Channel.

A narrow waterway with towering snow covered mountains on either side.

Located on the south end of Anvers Island, Palmer is the smallest of the United Statesâ&amp;#x20AC;&amp;#x2122; three year-round research stations, with berthing facilities for 45 people.

Station population drops to around 12 people in the winter months.

In operation since 1970, research at the station tends to have a focus on biological sciences.

from the microbial loop to the variety of sea birds in the region.

ecosystems. Everything that thrives in the Antarctic directly relies on something else that also thrives there.

As aspects of the ecosystem begin to change the balance of lifecycles get thrown out of balance.

It is a knowledge that I hope to begin to learn about while I am here.

Wildlife biologists of Dr. Bill Fraser’s research team study the local bird life. The data they gather is important for understanding the local ecosystem and for future conservancy regulation. Photo 1: Brown Skua sitting on nest; 2: Ben Cook prepares to put a temporary satellite transmitter on a Southern Giant Petrel to find out where and how far they go to feed during the nesting season; 3: Wildlife biologist Shawn Farry holds out a Brown Skua egg that he’ll quickly weigh and gently return to the nest; 4: Adelie penguin colony; 5: Elephant seal; 6: Sheathbills play on ice. The only birds in Antarctica without webbed feet.

After more than three decades of research, Dr. Bill Frasers’s team from the Polar Oceans Research Group surmises that Adelie penguin colonies around Palmer station have seen an 82% decline in population since the late 1970’s. This polar species is struggling to survive in this area as the region is changing to a subantarctic climate. The Brown Skua, a predator of the Adelie penguin, is also seeing dramatic population decline in the area, as its food source disappears.1

With the help of Seattle-based photographer, Janet Neuhauser, I made 12 pinhole cameras before leaving home.

Since being on the station, I have made approximately 10 more.

Time measured by light with the movement of the sun through the sky.

A poem rather than a definition.

It feels good to slow down and see more with less.

The light here is like none other that I have experienced.

Difficult to know when to sleep with 17 hours of daylight and the rest a dreamy twilight.

Sea ice has moved in again. For days. And days.

And for miles. And miles.

It feels good to know the quiet magnitude of Mother Nature on a daily basis. I am humbled.

Photo 1: Research vessel Laurence M. Gould tries to make itâ&amp;#x20AC;&amp;#x2122;s way through the pack ice to station before ultimately turning around; 3: At 1,600m Mount William sits above the Marr Ice Piedmont that completely covers Anvers Island. The ice front is approximately 180&#39; above sea level and 120&#39; below sea level at its deepest point.

While I was expecting to be taken by the science and the place itself; the mountains, ocean, ice and wildlife â&amp;#x20AC;&amp;#x201D;

I was not expecting to be taken by the people. As you can imagine, it takes a certain type of person

to dedicate their life to Antarctic research and support.

Upon my return home from the Ice, I sifted my way through thousands of pictures and several journals of notes that have ultimately informed and inspired this body of work. Using the photographed image as inspiration along with the antiquated technique of cameo engraved glass, I made representations of my collective experiences and first impressions of the Antarctic. In an ancient place where changes in climate are suddenly occurring on a decadal time scale, and in an age where everything is digitally stored, my engravings serve as a physical and archival record of the Antarctic Peninsula at the beginning of the 21st century.

An enormous “Thank You” to Sarah Traver and Traver Gallery. I am deeply grateful for the support they have given to this exhibition and accompanying catalog. It is a great privilege to introduce this work with them.

My eight-week deployment to Palmer was a long time to be away but that doesn’t include the two years of preparation and the time I continue to spend on the project to this day. So many people have supported and encouraged me along the way, it is difficult to know where to start or perhaps more accurately, where to end.

Thank you to Scott Morrison for another great video collaboration. You’re tops mate.

Without the endless support and encouragement of my partner Zak, none of this would have been possible. Thank you Zak.

A special thanks to Shawn Farry, Ben Cook and Carrie McAtee who so kindly let me tag along and who also answered an endless string of questions and knocks at the door of the birder hut. Thank you Bill Fraser who wasn’t on the Ice but still willing to let me work with his team.

Thank you to my family who also gave all of their support. Thank you to the National Science Foundation for the opportunity and Peter West who so kindly helped me through the application and deployment processes. Thank you to Samina Ouda for taking care of the logistics and Elaine Hood for help before and after the government shutdown. Thank you to all of the people who wrote letters of support for my project: Stefano Catalani, Kelly Conway, Dr. Charles Amsler, Lani McGregor, Richard Whiteley, Patricia Davidson and the late Jiri Harcuba.

Thanks to Douglas Krause for help with my Cape Shirreff pinhole camera.

Thank you Francis Sheil and Hannah Miller for making the best homemade food on the Ice. Thank you Mark Dalberth for good conversation. Thank you Carolyn Lipke for taking care of my lab needs. Thank you Michiel Gitzels and Jeff Otten for all the tech help. Thank you Greg Roberts, Tina Haskins, Jamie Collins and Shellie bench for teaching me about your research. Thank you Jullie Jackson, Andy Young, Steve Navarro and Glenn Grant for letting me follow you around. Thank you to everyone on station. As a result of this project, I am left with a deep sense of gratitude for all of the people who have so generously supported me on my journey. Thank you for believing in me.

April started working with glass in 1997, in Seattle, WA. She went on to study at the Australian National University, Canberra, Australia where she graduated in 2004. In 2003, Surgent met master Czech engraver Mr. Jiri Harcuba at Pilchuck glass school and changed her focus from blown to engraved glass. After completing her studies in Canberra she moved back to the Pacific Northwest where she set up an engraving studio. Surgent exhibits, teaches and lectures internationally. In 2013, the artist travelled to Antarctica with the National Science Foundation and is now focusing on work expressing her experiences of the Antarctic. 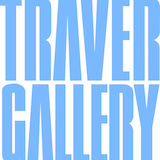