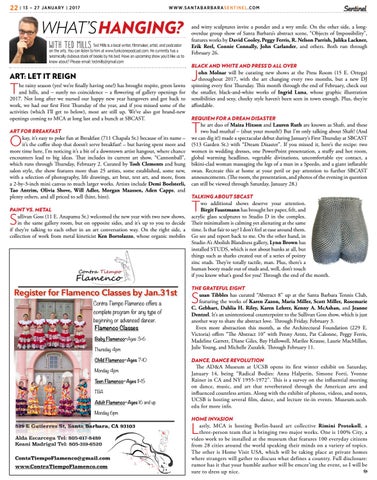 WHAT’SHANGING? with Ted Mills Ted Mills is a local writer, filmmaker, artist, and podcaster on the arts. You can listen to him at www.funkzonepodcast.com. He currently has a seismically dubious stack of books by his bed. Have an upcoming show you’d like us to know about? Please email: tedmills@gmail.com

he rainy season (yes! we’re finally having one!) has brought respite, green lawns and hills, and – surely no coincidence – a flowering of gallery openings for 2017. Not long after we nursed our happy new year hangovers and got back to work, we had our first First Thursday of the year, and if you missed some of the activities (which I’ll get to below), most are still up. We’ve also got brand-new openings coming to MCA at long last and a bunch at SBCAST. ART FOR BREAKFAST

kay, it’s easy to poke fun at Breakfast (711 Chapala St.) because of its name – it’s the coffee shop that doesn’t serve breakfast! – but having spent more and more time here, I’m noticing it’s a bit of a downtown artist hangout, where chance encounters lead to big ideas. That includes its current art show, “Cannonball”, which runs through Thursday, February 2. Curated by Tosh Clements and hung salon style, the show features more than 25 artists, some established, some new, with a selection of photography, life drawings, art brut, text art, and more, from a 2-by-3-inch mini canvas to much larger works. Artists include Demi Boelsterli, Tao Antrim, Olivia Shove, Will Adler, Morgan Maassen, Aden Capps, and plenty others, and all priced to sell (hint, hint). PAINT VS. METAL

ullivan Goss (11 E. Anapamu St.) welcomed the new year with two new shows, in the same gallery room, but on opposite sides, and it’s up to you to decide if they’re talking to each other in an art conversation way. On the right side, a collection of work from metal kineticist Ken Bortolazzo, whose organic mobiles

complete program for any type of beginning or advanced dancer.

and witty sculptures invite a ponder and a wry smile. On the other side, a longoverdue group show of Santa Barbara’s abstract scene, “Objects of Impossibility”, features works by David Cooley, Peggy Ferris, R. Nelson Parrish, Julika Lackner, Erik Reel, Connie Connally, John Carlander, and others. Both run through February 26. BLACK AND WHITE AND PRESS’D ALL OVER

ohn Molnar will be curating new shows at the Press Room (15 E. Ortega) throughout 2017, with the art changing every two months, but a new DJ spinning every first Thursday. This month through the end of February, check out the smaller, black-and-white works of Ingrid Luna, whose graphic illustration sensibilities and sexy, cheeky style haven’t been seen in town enough. Plus, they’re affordable. REQUIEM FOR A DREAM DISASTER

he art duo of Maiza Hixson and Lauren Ruth are known as Shaft, and these two bad muthaf – (shut your mouth!) But I’m only talking about Shaft! (And we can dig it!) made a spectacular debut during January’s First Thursday at SBCAST (513 Garden St.) with “Dream Disaster”. If you missed it, here’s the recipe: two women in wedding dresses, one PowerPoint presentation, a stuffy and hot room, global warming headlines, vegetable divinations, uncomfortable eye contact, a bikini-clad woman massaging the legs of a man in a Speedo, and a giant inflatable swan. Recreate this at home at your peril or pay attention to further SBCAST announcements. (The room, the presentation, and photos of the evening in question can still be viewed through Saturday, January 28.) TALKING ABOUT SBCAST

wo additional shows deserve your attention. Birgit Faustmann has brought her paper, felt, and acrylic glass sculptures to Studio D in the complex. Their minimalism is calming yet alienating at the same time. Is that fair to say? I don’t feel at ease around them. Go see and report back to me. On the other hand, in Studio A’s Abolish Blandness gallery, Lynn Brown has installed STUDS, which is not about hunks at all, but things such as sharks created out of a series of pointy zinc studs. They’re totally tactile, man. Plus, there’s a human booty made out of studs and, well, don’t touch if you know what’s good for you! Through the end of the month. THE GRATEFUL EIGHT

The AD&amp;A Museum at UCSB opens its first winter exhibit on Saturday, January 14, being “Radical Bodies: Anna Halperin, Simone Forti, Yvonne Rainer in CA and NY 1955-1972”. This is a survey on the influential meeting on dance, music, and art that reverberated through the American arts and influenced countless artists. Along with the exhibit of photos, videos, and notes, UCSB is hosting several film, dance, and lecture tie-in events. Museum.ucsb. edu for more info. HOME INVASION

astly, MCA is hosting Berlin-based art collective Rimini Protokoll, a three-person team that is bringing two major works. One is 100% City, a video work to be installed at the museum that features 100 everyday citizens from 28 cities around the world speaking their minds on a variety of topics. The other is Home Visit USA, which will be taking place at private homes where strangers will gather to discuss what defines a country. Full disclosure: rumor has it that your humble author will be emcee’ing the event, so I will be sure to dress up nice.