A Keeper of the Casa 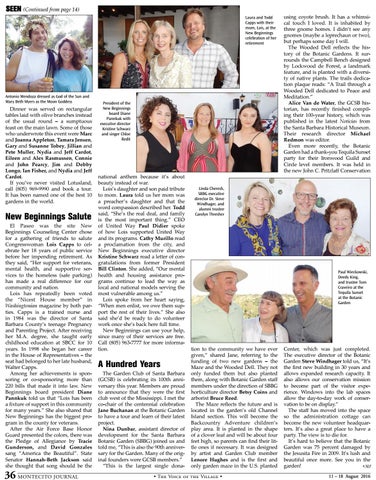 SEEN (Continued from page 14) Laura and Todd Capps with their mom, Lois, at the New Beginnings celebration of her retirement

Dinner was served on rectangular tables laid with olive branches instead of the usual round – a sumptuous feast on the main lawn. Some of those who underwrote this event were Marc and Joanna Appleton, Tamara Jensen, Gary and Susanne Tobey, Jillian and Pete Muller, Nydia and Jeff Cardot, Eileen and Alex Rasmussen, Connie and John Pearcy, Jim and Debby Longo, Ian Fisher, and Nydia and Jeff Cardot. If you’ve never visited Lotusland, call (805) 969-9990 and book a tour. It has been named one of the best 10 gardens in the world.

El Paseo was the site New Beginnings Counseling Center chose for a gathering of friends to salute Congresswoman Lois Capps to celebrate her 18 years of public service before her impending retirement. As they said, “Her support for veterans, mental health, and supportive services to the homeless (safe parking) has made a real difference for our community and nation. Lois has repeatedly been voted the “Nicest House member” in Washingtonian magazine by both parties. Capps is a trained nurse and in 1984 was the director of Santa Barbara County’s teenage Pregnancy and Parenting Project. After receiving her M.A. degree, she taught early childhood education at SBCC for 10 years. In 1998 she began her career in the House of Representatives – the seat had belonged to her late husband, Walter Capps. Among her achievements is sponsoring or co-sponsoring more than 220 bills that made it into law. New Beginnings board president Diane Pannkuk told us that “Lois has been a fixture of support in this community for many years.” She also shared that New Beginnings has the biggest program in the county for veterans. After the Air Force Base Honor Guard presented the colors, there was the Pledge of Allegiance by Tracie Gunderson, and David Gonzales sang “America the Beautiful”. State Senator Hannah-Beth Jackson said she thought that song should be the

national anthem because it’s about beauty instead of war. Lois’s daughter and son paid tribute to mom. Laura told us her mom was a preacher’s daughter and that the word compassion described her. Todd said, “She’s the real deal, and family is the most important thing.” CEO of United Way Paul Didier spoke of how Lois supported United Way and its programs. Cathy Murillo read a proclamation from the city, and New Beginnings executive director Kristine Schwarz read a letter of congratulations from former President Bill Clinton. She added, “Our mental health and housing assistance programs continue to lead the way as local and national models serving the most vulnerable among us.” Lois spoke from her heart saying, “When men enlist, we owe them support the rest of their lives.” She also said she’d be ready to do volunteer work once she’s back here full time. New Beginnings can use your help, since many of their services are free. Call (805) 963-7777 for more information.

The Garden Club of Santa Barbara (GCSB) is celebrating its 100th anniversary this year. Members are proud to announce that they were the first club west of the Mississippi. I met the co-chair of the centennial celebration Jane Buchanan at the Botanic Garden to have a tour and learn of their latest project. Nina Dunbar, assistant director of development for the Santa Barbara Botanic Garden (SBBG) joined us and told me, “This is also the 90th anniversary for the Garden. Many of the original founders were GCSB members.” “This is the largest single dona-

using coyote brush. It has a whimsical touch I loved. It is inhabited by three gnome homes. I didn’t see any gnomes (maybe a leprechaun or two), but perhaps some day I will. The Wooded Dell reflects the history of the Botanic Gardens. It surrounds the Campbell Bench designed by Lockwood de Forest, a landmark feature, and is planted with a diversity of native plants. The trails dedication plaque reads: “A Trail through a Wooded Dell dedicated to Peace and Meditation.” Alice Van de Water, the GCSB historian, has recently finished compiling their 100-year history, which was published in the latest Noticias from the Santa Barbara Historical Museum. Their research director Michael Redmon was editor. Even more recently, the Botanic Garden had a thank-you Tequila Sunset party for their Ironwood Guild and Circle level members. It was held in the new John C. Pritzlaff Conservation

Paul Wieckowski, Deedy King, and trustee Tom Craveiro at the Tequila Sunset at the Botanic Garden

tion to the community we have ever given,” shared Jane, referring to the funding of two new gardens – the Maze and the Wooded Dell. They not only funded them but also planted them, along with Botanic Garden staff members under the direction of SBBG horticulture director Betsy Coins and arborist Bruce Reed. The Maze reflects the future and is located in the garden’s old Channel Island section. This will become the Backcountry Adventure children’s play area. It is planted in the shape of a clover leaf and will be about four feet high, so parents can find their little ones if necessary. It was designed by artist and Garden Club member Lenore Hughes and is the first and only garden maze in the U.S. planted

Center, which was just completed. The executive director of the Botanic Garden Steve Windhager told us, “It’s the first new building in 30 years and allows expanded research capacity. It also allows our conservation mission to become part of the visitor experience. Windows into the lab spaces allow the day-to-day work of conservation to be on display.” The staff has moved into the space so the administration cottage can become the new volunteer headquarters. It’s also a great place to have a party. The view is to die for. It’s hard to believe that the Botanic Garden was 75 percent damaged by the Jesusita Fire in 2009. It’s lush and beautiful once more. See you in the garden! •MJ 11 – 18 August 2016

A Keeper of the Casa