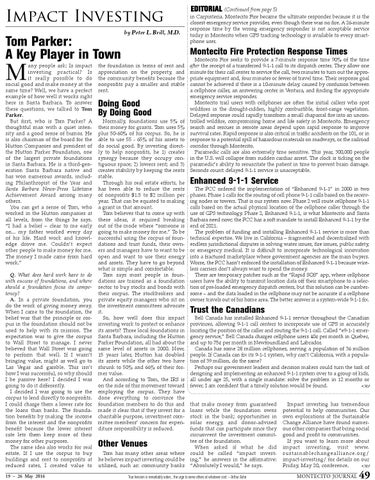 any people ask: Is impact investing practical? Is it really possible to do social good and make money at the same time? Well, we have a perfect example of how well it works right here in Santa Barbara. To answer these questions, we talked to Tom Parker. But first, who is Tom Parker? A thoughtful man with a quiet intensity and a good sense of humor. He is also chairman of the board for the Hutton Companies and president of the Hutton Parker Foundation, one of the largest private foundations in Santa Barbara. He is a third-generation Santa Barbara native and has won numerous awards, including Philanthropist of the Year and Santa Barbara News-Press Lifetime Achievement Award among many others. You can get a sense of Tom, who worked in the Hutton companies at all levels, from the things he says. “I had a belief – clear to me early on... my father worked every day of his life. Hard work and knowledge drove me. Couldn’t expect other people to make money for me. The money I made came from hard work.” Q. What does hard work have to do with success of foundations, and where should a foundation focus its competency? A. In a private foundation, you do the work of giving money away. When I came to the foundation, the belief was that the principle or corpus in the foundation should not be used to help with its mission. The expectation was to give the corpus to Wall Street to manage. I never believed that Wall Street was going to perform that well. If I wasn’t bringing value, might as well go to Las Vegas and gamble. This isn’t how I was successful, so why should I be passive here? I decided I was going to do it differently. I decided I was going to use the corpus to lend directly to nonprofits. I could charge them a lower rate for the loans than banks. The foundation benefits by making the income from the interest and the nonprofits benefit because the lower interest rate lets them keep more of their money for other purposes. The same idea also works for real estate. If I use the corpus to buy buildings and rent to nonprofits at reduced rates, I created value to 19 – 26 May 2016

in Carpinteria. Montecito Fire became the ultimate responder because it is the closest emergency service provider, even though there was no fire. A 26-minute response time by the wrong emergency responder is not acceptable service today in Montecito when GPS tracking technology is available to every smartphone user.

the foundation in terms of rent and appreciation on the property, and the community benefits because the nonprofits pay a smaller and stable rent.

Normally, foundations use 5% of their money for grants. Tom uses 5% plus 50-60% of his corpus. So, he is able to use 55 - 65% of his assets to do social good. By investing directly to help nonprofits, he 1) creates synergy because they occupy contiguous space; 2) lowers rent; and 3) creates stability by keeping the rents stable. Through his real estate efforts, he has been able to reduce the rents of nonprofits $1.5 to $2 million per year. That can be equated to making a grant in that amount. Tom believes that to come up with these ideas, it required breaking out of the mode where “someone is going to make money for me.” To be successful using the corpus of foundations and trust funds, their owners and managers have to want to be open and want to use their energy and assets. They have to go beyond what is simple and comfortable. Tom says most people in foundations are trained as a foundation sector to buy stocks and bonds with their corpus. The stockbrokers and private equity managers who sit on the investment committees advocate it. So, how well does this impact investing work to protect or enhance its assets? Three local foundations in Santa Barbara, including the Hutton Parker Foundation, all had about the same level of assets in 2000. Now, 15 years later, Hutton has doubled its assets while the other two have shrunk to 50% and 66% of their former value. And according to Tom, the IRS is on the side of this movement toward employing the corpus. They have done everything to convince the foundation members to do this and made it clear that if they invest for a charitable purpose, investment committee members’ concern for expenditure responsibility is reduced.

Tom has many other areas where he believes impact investing could be utilized, such as: community banks

Montecito Fire seeks to provide a 7-minute response time 90% of the time after the receipt of a transferred 9-1-1 call to its dispatch center. They allow one minute for their call center to service the call, two minutes to turn out the appropriate equipment and, four minutes or fewer of travel time. Their response goal cannot be achieved if there is a 10-minute delay, caused by confusion between a cellphone caller, an answering center in Ventura, and finding the appropriate emergency service responder. Montecito trail users with cellphones are often the initial callers who spot wildfires in the drought-ridden, highly combustible, front-range vegetation. Delayed response could rapidly transform a small chaparral fire into an uncontrolled wildfire, compromising home and life safety in Montecito. Emergency search and rescues in remote areas depend upon rapid response to improve survival rates. Rapid response is also critical in traffic accidents on the 101, or in response to a potential spill of hazardous materials on roadways, or the railroad corridor through Montecito. Paramedic calls are also extremely time sensitive. This year, 300,000 people in the U.S. will collapse from sudden cardiac arrest. The clock is ticking on the paramedic’s ability to resuscitate the patient in time to prevent brain damage. Seconds count: delayed 9-1-1 service is unacceptable.

The FCC ordered the implementation of “Enhanced 9-1-1” in 2000 in two phases. Phase 1 calls for the routing of cell phone 9-1-1 calls based on the receiving nodes or towers. That is our system now. Phase 2 will route cellphone 9-1-1 calls based on the actual physical location of the cellphone caller through the use of GPS technology. Phase 2, Enhanced 9-1-1, is what Montecito and Santa Barbara need now; the FCC has a soft mandate to install Enhanced 9-1-1 by the end of 2021. The problem of funding and installing Enhanced 9-1-1 service is more than technical expertise. We live in California – fragmented and decentralized with endless jurisdictional disputes in solving water issues, fire issues, public safety, or emergency medical. It is difficult to incorporate technological innovation into a fractured marketplace where government agencies are the main buyers. Worse, the FCC hasn’t enforced the installation of Enhanced 9-1-1 because wireless carriers don’t always want to spend the money. There are temporary patches such as the “Rapid SOS” app, where cellphone users have the ability to transmit location data off their smartphone to a selection of pre-loaded emergency dispatch centers, but this solution can be cumbersome – and the data loaded in the cellphone may not be accurate if a cellphone owner travels out of his home area. The better answer is a system-wide 9-1-1 fix.

Bell Canada has installed Enhanced 9-1-1 service throughout the Canadian provinces, allowing 9-1-1 call centers to incorporate use of GPS in accurately locating the position of the caller and routing the 9-1-1 call. Called “e9-1-1 emergency service,” Bell Canada charges cellphone users 40¢ per month in Quebec, and up to 75¢ per month in Newfoundland and Labrador. Canada has some 28 million cellphones, serving a population of 36 million people. If Canada can fix its 9-1-1 system, why can’t California, with a population of 39 million, do the same? Perhaps our government leaders and decision makers could turn the task of designing and implementing an enhanced 9-1-1 system over to a group of kids, all under age 25, with a single mandate: solve the problem in 12 months or fewer. I am confident that a timely solution would be found. •MJ that make money from guaranteed loans while the foundation owns stock in the bank; opportunities in solar energy, and donor-advised funds that can participate since they circumvent the investment committee of the foundation. When asked if what he did could be called “impact investing,” he answers in the affirmative: “Absolutely I would,” he says.

True heroism is remarkably sober... the urge to serve others at whatever cost. – Arthur Ashe

Impact investing has tremendous potential to help communities. Our own explorations at the Sustainable Change Alliance have found numerous other companies that bring social good and profit to communities. If you want to learn more about impact investing, visit www. s u s t a i n a b l e c h a n g e a l l i a n c e . o rg / impact-investing/ for details on our Friday, May 20, conference. •MJ MONTECITO JOURNAL