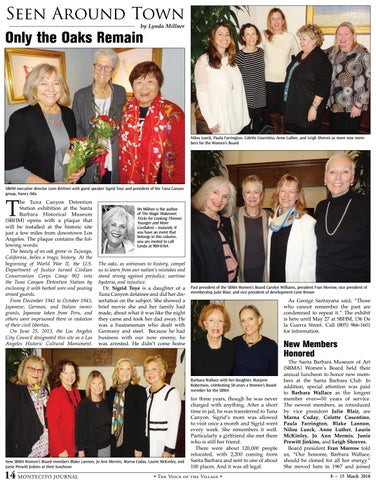 Only the Oaks Remain

he Tuna Canyon Detention Station exhibition at the Santa Barbara Historical Museum (SBHM) opens with a plaque that will be installed at the historic site just a few miles from downtown Los Angeles. The plaque contains the following words: The beauty of an oak grove in Tujunga, California, belies a tragic history. At the beginning of World War II, the U.S. Department of Justice turned Civilian Conservation Corps Camp 902 into the Tuna Canyon Detention Station by enclosing it with barbed wire and posting armed guards. From December 1941 to October 1943, Japanese, German, and Italian immigrants, Japanese taken from Peru, and others were imprisoned there in violation of their civil liberties. On June 25, 2013, the Los Angeles City Council designated this site as a Los Angeles Historic Cultural Monument.

Ms Millner is the author of The Magic Makeover, Tricks for Looking Thinner, Younger and More Confident – Instantly. If you have an event that belongs in this column, you are invited to call Lynda at 969-6164.

The oaks, as witnesses to history, compel us to learn from our nation’s mistakes and stand strong against prejudice, wartime hysteria, and injustice. Dr. Sigrid Toye is a daughter of a Tuna Canyon detainee and did her dissertation on the subject. She showed a brief movie she and her family had made, about what it was like the night they came and took her dad away. He was a businessman who dealt with Germany and steel. Because he had business with our now enemy, he was arrested. He didn’t come home

As George Santayana said, “Those who cannot remember the past are condemned to repeat it.” The exhibit is here until May 27 at SBHM, 136 De la Guerra Street. Call (805) 966-1601 for information.

New Members Honored Barbara Wallace with her daughter, Marjorie Robertson, celebrating 50 years a Women’s Board member for the SBMA

for three years, though he was never charged with anything. After a short time in jail, he was transferred to Tuna Canyon. Sigrid’s mom was allowed to visit once a month and Sigrid went every week. She remembers it well. Particularly a girlfriend she met there who is still her friend. There were about 120,000 people relocated, with 2,200 coming from Santa Barbara and sent to one of about 100 places. And it was all legal.

The Santa Barbara Museum of Art (SBMA) Women’s Board held their annual luncheon to honor new members at the Santa Barbara Club. In addition, special attention was paid to Barbara Wallace as the longest member ever—50 years of service. The newest members, as introduced by vice president Julie Blair, are Marna Coday, Colette Cosentino, Paula Farrington, Blake Lannon, Nilou Lueck, Anne Luther, Laurie McKinley, Jo Ann Mermis, Junie Prewitt Jinkins, and Leigh Shreves. Board president Fran Morrow told us, “Our honoree, Barbara Wallace, should be cloned for all her energy.” She moved here in 1967 and joined 8 – 15 March 2018