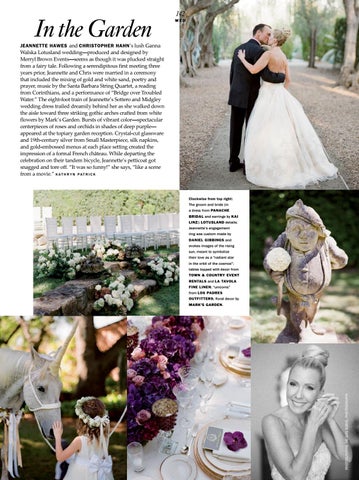 JEANNETTE HAWES and CHRISTOPHER HAHN ’s lush Ganna Walska Lotusland wedding—produced and designed by Merryl Brown Events—seems as though it was plucked straight from a fairy tale. Following a serendipitous first meeting three years prior, Jeannette and Chris were married in a ceremony that included the mixing of gold and white sand, poetry and prayer, music by the Santa Barbara String Quartet, a reading from Corinthians, and a performance of “Bridge over Troubled Water.” The eight-foot train of Jeannette’s Sottero and Midgley wedding dress trailed dreamily behind her as she walked down the aisle toward three striking gothic arches crafted from white flowers by Mark’s Garden. Bursts of vibrant color—spectacular centerpieces of roses and orchids in shades of deep purple— appeared at the topiary garden reception. Crystal-cut glassware and 19th-century silver from Small Masterpiece, silk napkins, and gold-embossed menus at each place setting created the impression of a formal French château. While departing the celebration on their tandem bicycle, Jeannette’s petticoat got snagged and tore off. “It was so funny!” she says, “like a scene from a movie.” K A T H R Y N P A T R I C K

Clockwise from top right: The groom and bride (in a dress from PANACHE BRIDAL and earrings by KAI LINZ ); LOTUSLAND details;

ring was custom made by

evokes images of the rising sun, meant to symbolize their love as a “radiant star in the orbit of the cosmos”; tables topped with decor from TOWN & COUNTRY EVENT RENTALS and LA TAVOLA 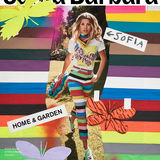