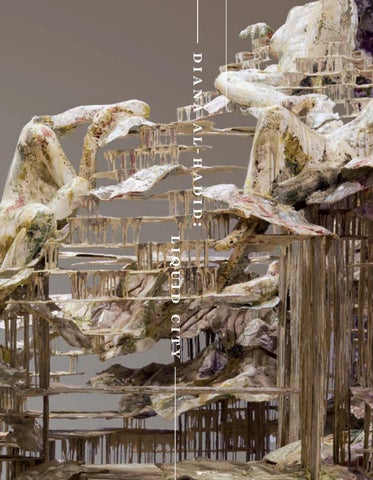 Diana Al-Hadid is fascinated by boundaries in all forms—where something begins and ends, and how we define or belong to a place, be it architectural, sculptural, or experiential. Her panoply of disparate references stretches across time and space as she navigates the division between two-dimensional mark-making and three-dimensional sculpture, the imagined and the real, interior and exterior, belonging and alienation, the ruin and the yet-to-be-completed. Her monumental sculpture Nolli’s Orders (2012)—the centerpiece of her exhibition Liquid City at the San Jose Museum of Art—demonstrates Al-Hadid’s skill in evocatively mingling architectural legacies and fragmented histories with aesthetic aims. Simultaneously architectural and aqueous and neither, Nolli’s Orders formally evokes a grand classical fountain in Rome: water cascades around languid nudes, yet the simulated drips and rivulets are arrested midair. Surfaces are perplexingly rough-hewn, almost crude, with glimmers from underlying tin foil. We seem to have stumbled onto an artwork either still in progress or abandoned to decay. It skirts boundaries, defiantly liminal, wielding historical allusions and contemporary materials, collapsing physical and psychological geographies, and projecting flat picture planes into real space toward grand yet uncertain ends. 1

In 1748, Italian architect and surveyor Giambattista Nolli (1701–1756) published the Pianta Grande, or large map of Rome, establishing a cartographic standard for accuracy and detail that has yet to be surpassed.1 He revolutionized mapmaking by graphically distinguishing public from private architectural spaces: white areas or voids indicate civic spaces like churches, theaters, courtyards, and porticoes of buildings. Private structures, by contrast, are rendered in solid black. Al-Hadid was drawn to the map by its graphic depiction of the “relationship of public and private and mass and void and where we establish boundaries as we navigate the city.”2 She admired Nolli’s subversion of conventional delineations between architectural interior and exterior in favor of conveying a more experiential account of the public urban fabric as it unfolds. Though Al-Hadid titled her sculpture only as it neared completion, her evocation of a Roman map that considers the spatial relationship of the private individual to the body politic is significant. As a sculptor, shaping the experience of space with dialectics of solid and void, interior and exterior, is her métier. That an abstraction such as a map or sculpture can convey a sense of place, and thereby address themes of belonging and alienation, is where the artist’s deft manipulation of materials—in what she has referred to as the “illogical pursuit” of an artist—triggers wide-ranging wanderings.

In a substantial body of work that encompasses sculptures of polymer gypsum and bronze, wall panels, and drawings, eclectic references abound. Al-Hadid draws freely from art history, architecture, literature, physics, cosmology, and scientific history. Identifiable references include Gradiva, the robed walking woman in a Roman bas-relief from the fourth century BCE; Scheherazade from the folktales of “One Thousand and One Arabian Nights”; black holes in outer space; the water clock of Muslim mechanical engineer Al-Jazari (1136–1206); and Pieter Bruegel the Elder’s painting Tower of Babel (1563). But Al-Hadid’s research is not so much academic as it is an idiosyncratic gleaning, emblematic of our Internet-driven era in which a Google search collapses time and space, uniting Bauhaus buildings and Syrian citadels on a single screen. Past and present, near and far, have never been closer together. Al-Hadid deals with fragments rather than the sum of a subject or narrative, extracting formal details like the drape of a cloth, a distortion of perspective, or an architectural flourish. A Christ painted in a recumbent position could become a headless, sculpted body in repose, as Al-Hadid strips figures of narrative and context. For Nolli’s Orders, she isolates figures, disentangling them from their common communal positions in Old Master compositions. Their postures feel familiar but unspecific. From one perspective, the assembly seems balanced and whole, but as the viewer moves around the sculpture the figures are revealed to be concave shells, nearly slipping from their illogical perches. Sprawling limbs do not overlap or touch—a rather haunting interpretation of collective existence today.

Interviews with the artist are peppered with anecdotes of her emigrating with her family from Syria to Ohio at age five, her unfamiliarity with Christian iconography, and her uneasy relationship with the figure, forbidden in Islamic art. In her master’s thesis, she quoted architect and theorist Christian Norberg-Schulz: “the place is the concrete manifestation of man’s dwelling, and his identity depends on his belonging to places” in relation to her experience as an immigrant and the “transitory psychological place in the fuzzy between-land of Arab-America.”3 Some of her early work was explicitly self-referential. 6

While much of Al-Hadid’s work circles around architectural heritage, her familiarity with such sites is rarely firsthand; rather it is deliberately mediated through Renaissance and Mannerist representations. She re-configures these painted architectural interiors and cityscapes into hybrids, translating two-dimensional compositions, figure-ground relationships, and perspectives into sculptural space. Perhaps not surprisingly, given her affinity for painted architectures, Al-Hadid tends to construct using flat planes—solid layers and dripped lattices of paint—engineered and structured to contain space. Much of her work gives the impression of gravity defied, a flat image pulled open like a paper accordion, dripping paint, ephemeral and yet stagnantly timeless. As a graduate student, Al-Hadid became interested in archaeological layers of history: Hellenistic influences evident in ruins near Aleppo and the impact of Moorish style on Spanish cathedrals. Though her material fissures and apparently degraded surfaces suggest a corrosive force, Al-Hadid’s process is in fact entirely additive, a buildup of layers of paint and polymer gypsum strengthened with steel. Such cumulative strata—possibly the “orders” of Al-Hadid’s title—are formed of layers both archeological and social, a kaleidoscopic past firmly rooted in the present.

Her poetic Spun of the Limits of my Lonely Waltz (2006) is an inverted Gothic cathedral, its spires touching the ground at the points where, as the title suggests, the artist’s feet landed in her solo dance. That same year, she modeled the Aleppo citadel (the architectural icon of her birthplace) in The Gradual Approach of My Disintegration. Nonetheless, interpreting Al-Hadid solely by her Syrian heritage contradicts the nuanced oscillation of boundaries and the destabilization of certainty that distinguishes her work.

In Al-Hadid’s unique method, paint is mixed into the foundational material (polymer gypsum), the act of its making laminated into the “image” itself. Process intertwines figure with ground, skin and structure, event and place. While in graduate school, a seminal encounter with Ornament and Crime (1910) by Adolf Loos set her on an explicit path to incorporate into her work the maligned ornamental filigree and patterns from Islamic calligraphy. The European theorist described ornament as “degenerate,” equating its elimination with cultural evolution, an aesthetic value that has haunted the development of Western art history. In Nolli’s Orders, the improvised, gritty surface and arabesques of form contrast brazenly with rigid white pedestals, markers of modernist architecture or perhaps the Western art gallery’s moralizing aesthetics. It is a tension that Al-Hadid recognizes in her work: “Part of straddling two very different cultures has also been to reconcile two oppositional world views…. I can identify areas of my work where reductive organizing principles have contained opulent effusions, and other areas where decorative impulses have overtaken essentialist design.”4 Tin foil visible beneath the polymer gypsum may be an approximation of Renaissance gold leaf or simply a resourceful material appropriation from the Ohio suburbs of Al-Hadid’s youth. Employing a methodology consistent with her approach to imagery, she favors anonymous materials, devoid of history or character, which she associates with generic American suburbia.

From a city planning perspective, to carve out a clearing in densely built Rome was a statement of power, and Nolli’s introduction of voids into the city’s tight skein of dark streets may have had political implications. In contemporary usage, terms like “transparency,” “openness,” and “visibility” carry democratic connotations of honesty and accessibility. Al-Hadid’s work—sculptures, wall panels, and drawings alike—permit vision to snake through labyrinthine innards. “I like everything to be revealed and available. See the process, the under and above, the inside and outside. Metaphorically it has something to do with a right to knowledge.”5 Her alluring voids reveal structure and process simultaneously; interior and exterior form a single breath. She makes drawings with charcoal and pastel on Mylar, ghostly forms on a filmy support that seem to glow internally. Her panels, worked to the point of defeat, are so perforated with fissures as to verge on illegibility. Perhaps Al-Hadid was inspired by the Italian printmaker Giovanni Battista Piranesi (1720–1778), a collaborator and often-time competitor of Nolli, whose dense layers of visual information, liberties with perspective, and vertiginous architectural voids have informed much of her early work. Piranesi is known for his antiquarian etchings of Roman landmarks and fantastical aggregates of monumental architecture and ruins. The impossible spaces of his imaginary prisons lure our gaze into proliferating staircases and arched passageways, voluminous and disorienting, seeming to elude fixed perspective. AlHadid’s work, which she has referred to as “impossible architecture,” is similarly punctuated: light traverses and unmoors rational space to open up perspectives and destabilize architectural foundations—the built order that defines our world. Such a liberal yielding to light, however, does not unequivocally result in enlightenment. Al-Hadid’s images are so open, so permeable and unbound, that their subjects are nearly ungraspable. The promise of vision is ultimately unsatisfactory. The overabundance of images in our digital culture, for example, so inundates us as to render them virtually meaningless. So much light is loosed that we are blinded. The famous Fontana dei Quattro Fiumi (1651) by Gian Lorenzo Bernini (1598–1680) anchors Rome’s Piazza Navona with its subservient allegorical figures declaring papal authority over the continents. AlHadid’s imposing Nolli’s Orders resembles such a fountain, but lacks resolution, leaving one to wonder what authority governs civic space today. It could be a materialization of our so-called “liquid” society, an existence characterized by “fragility, temporariness, vulnerability and inclination to constant change. To ‘be modern’ means... forever ‘becoming’, avoiding completion, staying under-defined.”6 Al-Hadid’s defiantly contemporary work occupies such an interstice. Her engagement with the past, selective plucking of narratives and undermining of finalities, is guided by both a highly idiosyncratic 10

and a generational logic. Nolli’s Orders is not a map of Rome, but a vision of a “placeless place,” a liquid city. Fluid and elusive, it dislocates a geographic sense of belonging to a constantly shifting and unstable domain appropriate in an era of mass displacement. It is a peopled environment caught in mid-sentence, and we are left wondering how it will end. Lauren Schell Dickens Curator

The artist quoted in Robin Reisenfeld, “The Labyrinth in the Tower: A Conversation with Diana Al-Hadid,” Sculpture 28, no.2 March 2009, p. 28.

Diana Al-Hadid: Liquid City is on view at the San Jose Museum of Art, February 24–September 24, 2017. The exhibition is sponsored by the Myra Reinhard Family Foundation. Additional support provided by Tad and Jackson Freese, and Wanda Kownacki. 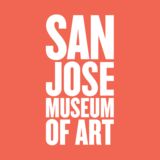 Diana Al-Hadid is fascinated by boundaries in all forms—where something begins and ends, and how we de ne or belong to a place, be it archit...

Diana Al-Hadid is fascinated by boundaries in all forms—where something begins and ends, and how we de ne or belong to a place, be it archit...