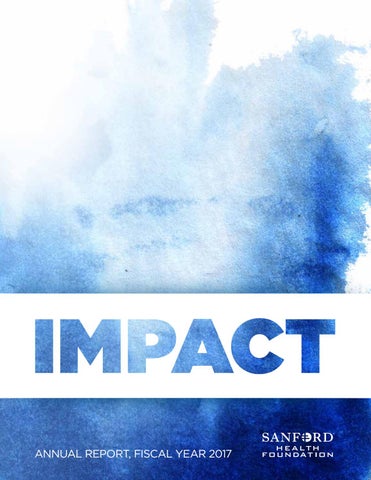 ITâ&#x20AC;&#x2122;S BEEN AN INCREDIBLE YEAR. Driven by your passion, you have given your time and resources to improve the human condition in your community. You made a profound difference in the lives of countless patients and families. We are pleased to share this report summarizing the impact of your generosity during the 2017 fiscal year (July 2016 through June 2017). As you browse through the pages that follow, I hope youâ&#x20AC;&#x2122;re filled with pride to see the transformative power of philanthropy. Thank you for entrusting us with your philanthropic investment and for helping shape the future of health care, today. With gratitude,

TRANSCENDING BORDERS By giving locally to improve care, accelerate discovery and foster innovation where you live, you also strengthen a network of hope, health and healing across the Upper Midwest and beyond.

OUR IMPACT YOUR DONATIONS AT WORK TOTAL FUNDS RAISED:

CAMPAIGNS & PROGRAMS CAMPAIGNS* Care Without Limits | Bemidji Raised to date: $4.9 million Thanks to all who generously supported this campaign, construction progress is now underway at the site of the new Joe Lueken Sanford Bemidji Cancer Center! The new center will expand services, technology and treatment options close to home.

Builders of Excellence | Bismarck Raised to date: $4.5 million We are now more than five years into this ambitious endowment campaign for the future of health care in western North Dakota. Today, tomorrow and for generations to come, these endowments will generate funding to advance cutting-edge research, patient services, staff education and so much more. Thank you to all our generous donors for supporting a legacy of excellence at Sanford Bismarck.

Since this campaign launched in 2011, more than 21,000 donors stepped forward to help bring the new Sanford Medical Center Fargo to life.

It was the largest fundraising effort in the Foundationâ&#x20AC;&#x2122;s history, and every dollar raised is invested in the Fargo region, providing permanent support for patient care, staff education, research and everything in between.

* Fundraising totals represent funds raised through the close of fiscal year 2017, on June 30, 2017.

Hope Has a New Home | Sioux Falls Raised to date: $2.4 million In October 2016, we celebrated the grand opening of the new Edith Sanford Breast Center and reopening of the Sanford Cancer Center in Sioux Falls. For generations to come, these centers will remain a symbol of hope and healing to patients across the region, all thanks to the many donors who supported this campaign to fuel cancer research and expand and enhance patient care and services.

The Gift of Time | Sioux Falls Raised to date: $9.8 million In October 2017, Ava’s House by Sanford officially opened its doors — a milestone made possible by our many donors who contributed generously to the construction phase of the Gift of Time campaign. This new acute-level, multi-generational hospice facility extends Sanford’s continuum of care and is one of only four in the nation to include in-patient hospice care for children and young adults. Continued support for this campaign will fund an endowment to support the mission of Ava’s House for decades to come and give patients of all ages the gift of living each final day to its fullest potential, surrounded in love, compassion and comfort.

Unite | Thief River Falls Raised to date: $245,000 Donors across the region came together to enhance the Sanford Health Thief River Falls Wellness Center with kid-friendly fitness and recreation equipment. Thank you for investing in the health and wellness of our local kids!

CAMPAIGNS & PROGRAMS PROGRAMS* Edith Sanford Breast Foundation | Enterprise-wide Raised in FY2017: $708,000 Over the past year, thousands of supporters helped advance local breast cancer research and care by donating generously, racing for TeamEdith and attending or volunteering at events. Every dollar raised has been dedicated 100 percent to our mission to unlock each woman’s genetic code, advance today’s prevention and treatment, and end breast cancer for future generations.

Children’s Miracle Network at Sanford Children’s | North Dakota Raised in FY2017: $1.1 million Since 1984, Sanford Children’s Hospital in Fargo has proudly served children and families as North Dakota’s only Children’s Miracle Network Hospital. Every dollar raised, from Fargo to Bismarck and beyond, stays in the state to support family services and unique programs, provide education and help purchase lifesaving equipment and technology to save and transform lives close to home. Thank you to our generous donors who help make miracles happen here every day.

Sanford Roger Maris Cancer Center | Fargo Raised in FY2017: $2.3 million Each year, patients across the region turn to Roger Maris for compassionate, comprehensive cancer care, close to home. The extraordinary generosity of our donors helps keep the center on the cutting edge of research and patient care by providing for advanced technology, equipment, special services, staff education and more.

The tribute to Denny Sanford will open in late 2017 in Sioux Falls.

For the second year in a row, Sanford Mayville was ranked among the Top 20 Critical Access Hospitals in the nation by the National Rural Health Association (NRHA).

The event raised nearly $12,000 in one day for local research and care.

Donors to the Hope Has a New Home campaign helped secure a future of cutting-edge research and care within these centers.

More than $216,000 was raised for Sanford Children’s Miracle Network in Sioux Falls.

The program was honored as the nation’s top fundraiser in a small market — a reflection of the incredible generosity of our region’s donors.

Thanks to funds raised through Brave Kids Bold Cures, this special program is made available for kids facing cancer at Sanford Bismarck.

Raised more than $41,000 for Children’s Miracle Network at Sanford Children’s.

1,388 bikers rode in the Great American Bike Race and raised $400,000 for local kids with cerebral palsy and related conditions.

Supporters gathered to bless the threshold of the new hospice facility.

A DECADE SHAPED BY PHILANTHROPY

JUST OVER TEN YEARS AGO, Denny Sanford changed the trajectory of our health system. Through a historic $400 million gift — the largest known gift to an American health care organization — he helped transform a regional health care provider into a world leader in lifesaving discovery and innovation. To date, Mr. Sanford has entrusted Sanford Health with nearly $1 billion in gifts to advance bold research and patient care initiatives.

HONORING MR. SANFORD’S LEGACY Coinciding with this special 10-year anniversary, Sanford Health embarked on a new project to honor its namesake and greatest benefactor. The Sanford House, a new facility located in Sioux Falls, S.D., celebrates Mr. Sanford’s extraordinary philanthropy. It also continues his legacy in health care by serving as home to the Sanford Health Foundation and the first stop for potential donors, strategic partners and national and world leaders interested in Sanford Health. The grand opening celebration is expected in the summer of 2018. Thank you to everyone who has contributed to this project!

HONORS AND LEGACY DONORS We owe a great many thanks to our friends listed here and to the many hundreds more whose generosity empowers Sanford Health to go above and beyond in the work of health and healing. Donors are listed in alphabetical order and include supporters from Bismarck, Bemidji, Fargo, Hillsboro, Mayville, Sioux Falls and Thief River Falls.

“The center has saved so many lives, not just mine. I’m so grateful to have received this care close to home.” -Sally Ellingson, Bemidji, MN

“The people who are taking care of me at the Edith Sanford Breast Center have become like family. It was like I’d known them forever and I could ask them anything.” -Kathy Sundvold, Sioux Falls, SD

When Sundvold was diagnosed with breast cancer, she refused to let her disease take over other aspects of her life. Her medical team at the Edith Sanford Breast Center understood that too. “It was an amazingly positive experience for what we were going through at that time,” she said. Today, Sundvold can proudly call herself a survivor. Cowboy Up Ride Against Cancer Jesse and Mindy Craig Craig H. Neilsen Foundation Craig Properties, LLC Dr. Michael and Barbara Crandell Dr. Robert N. and Kathleen M. Crank Credit Union Association of the Dakotas Credit Unions for Kids Eric Ista and Jennifer Cresap Carol and Daniel Cressman Ron and Patricia Crider Critters & Roskens Dakota Pizza Dean and Wendy Crotty Rose and Ed Crotty Cullen Children’s Foundation

“The medical staff as a whole was just incredible in Fargo. We have a lot more names on our Christmas card list now, but that’s a good thing because they are family.” -Alan Klain, Turtle Lake, ND

“I knew I would never be the same, but I couldn’t have asked for a better place to be than the Edith Sanford Breast Center. The care I received was just amazing.” -Jeanine Rosenboom, Dickinson, ND

Rosenboom was diagnosed with breast cancer and heart disease on the same day. Thanks to expanded health care services in western North Dakota, she was able to receive all of her treatment at the Edith Sanford Breast Center and Sanford Health in Bismarck, with checkups in her hometown of Dickinson.

“Having medical care in our community is the most important thing. When you can have it in a little hometown like this, the personal connection you create with the staff is priceless.” -Connie Tate, Hunter, ND

“I would never be alive today if it hadn’t been for the Mayville hospital.” -Alice Strand, Portland, ND

“Having a doctor who genuinely cares can change your experience so much.” -C arissa Hultgren, Thief River Falls, MN

* Deceased ++ Department fundraising This list includes individuals who made their own contributions, made recommendations regarding distributions from their donor advised funds and/or requested that third parties such as family foundations make contributions to the Sanford Health Foundation.

A LAST WORD OF THANKS... Please know that every effort has been made to ensure the accuracy of names and lists. Thank you for your support! 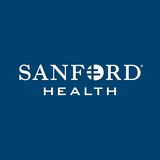