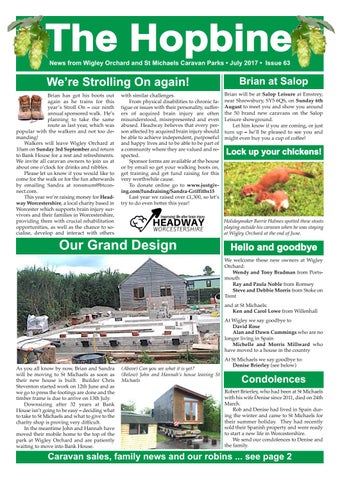 Brian has got his boots out again as he trains for this year’s Stroll On – our ninth annual sponsored walk. He’s planning to take the same route as last year, which was popular with the walkers and not too demanding! Walkers will leave Wigley Orchard at 10am on Sunday 3rd September and return to Bank House for a rest and refreshments. We invite all caravan owners to join us at about one o’clock for drinks and nibbles. Please let us know if you would like to come for the walk or for the fun afterwards by emailing Sandra at ronsmum@btconnect.com. This year we’re raising money for Headway Worcestershire, a local charity based in Worcester which supports brain injury survivors and their families in Worcestershire, providing them with crucial rehabilitation opportunities, as well as the chance to socialise, develop and interact with others

with similar challenges. From physical disabilities to chronic fatigue or issues with their personality, sufferers of acquired brain injury are often misunderstood, misrepresented and even abused. Headway believes that every person affected by acquired brain injury should be able to achieve independent, purposeful and happy lives and to be able to be part of a community where they are valued and respected. Sponsor forms are available at the house or by email so get your walking boots on, get training and get fund raising for this very worthwhile cause. To donate online go to www.justgiving.com/fundraising/Sandra-Griffiths15 Last year we raised over £1,300, so let’s try to do even better this year!

Brian will be at Salop Leisure at Emstrey, near Shrewsbury, SY5 6QS, on Sunday 6th August to meet you and show you around the 50 brand new caravans on the Salop Leisure showground. Let him know if you are coming, or just turn up – he’ll be pleased to see you and might even buy you a cup of coffee!

Lock up your chickens!

Holidaymaker Barrie Holmes spotted these stoats playing outside his caravan when he was staying at Wigley Orchard at the end of June.

We welcome these new owners at Wigley Orchard: Wendy and Tony Bradman from Portsmouth Ray and Paula Noble from Romsey Steve and Debbie Morris from Stoke on Trent and at St Michaels: Ken and Carol Lowe from Willenhall At Wigley we say goodbye to David Rose Alan and Dawn Cummings who are no longer living in Spain Michelle and Morris Millward who have moved to a house in the country

As you all know by now, Brian and Sandra will be moving to St Michaels as soon as their new house is built. Builder Chris Steventon started work on 12th June and as we go to press the footings are done and the timber frame is due to arrive on 13th July. Downsizing after 32 years at Bank House isn’t going to be easy – deciding what to take to St Michaels and what to give to the charity shop is proving very difficult. In the meantime John and Hannah have moved their mobile home to the top of the park at Wigley Orchard and are patiently waiting to move into Bank House.

(Above) Can you see what it is yet? (Below) John and Hannah’s house leaving St Michaels

At St Michaels we say goodbye to: Denise Brierley (see below)

Robert Brierley, who had been at St Michaels with his wife Denise since 2011, died on 24th March. Rob and Denise had lived in Spain during the winter and came to St Michaels for their summer holiday. They had recently sold their Spanish property and were ready to start a new life in Worcestershire. We send our condolences to Denise and the family.

Details of all our caravans for sale are published on the website. Go to www.wigleyorchard.co.uk or www.stmichaelscaravans.co.uk and follow the links to the For Sale page.

We will have five holiday hire caravans at St Michaels in 2018 and only 12 at Wigley, so there will be a great opportunity for you to upgrade to a quality caravan at a bargain price – for example we have a choice of 2015 and 2016 models for under £30,000 on either park. These are in tiptop condition and represent a reduction in price of around 25% compared with new. Speak to Brian or John if you are interested. Deals will be available at Wigley during October and at St Michaels in November. What about an early Christmas present?

The story of our robins

Who knew, when we put the log basket in the porch outside the back door and then threw an old doormat into it, ready to take to the garage for the summer, that a robin would think it the perfect place to build her nest? It’s noisy with people coming and going, cars and tractors driving past, but she soon made it her home. We watched her building the nest, bustling in and out – the male and female are identical but this is definitely a pink job. She would come and sit on the edge of the log basket, beak full of bits of twig and grass, and then dart under the doormat where she was completely out of sight. Several times we thought she had been scared off – by a barking dog, by people trying to see the nest – but she always came back. Once the eggs were laid we could just see the female’s eyes shining in the darkness as she sat on them. Sometimes she came out and took some food from the male – apparently the male can supply over a third of his mate&#39;s food intake during nest building and egg laying. After a couple of weeks the babies hatched and we could see four tiny yellow beaks. The parents shared the childcare: they were busy all day, diving into the nest with their beaks full of food – fresh grass or a tasty worm – to satisfy those four ever-open

mouths! They were much more cautious now. Sometimes if there were too many people around they’d wait in the background until everyone had gone and the back door was shut. One Saturday the babies were very noisy, high pitched cries coming from the nest, and the mum and dad were busier than ever delivering big juicy worms. We thought they were about two weeks old and ready to leave the nest. And on Sunday morning the nest was empty. Sometime during the long light evening or in the early morning they learnt to fly. Just one was left sitting on the ground but when his mother appeared with a worm he fluttered to meet her, grabbed the food and flew off into the bushes. Later in the day one of the babies found its way into the house. We rescued it from behind a cupboard and let it go and away it flew, straight to where its mother was calling for it. And as it flew, a tiny scrap of a thing with big feet and big eyes which had only left the nest hours before, my heart swelled with what felt very much like pride! What a treat it’s been to have the robins’ nest so near the house and to be able to follow their progress from egg to fully fledged bird at such close quarters. We’ll miss them.

On Friday 23rd June Hannah and her friend Abi (landlady of the Baiting House) took part in the Snowdon Midnight Challenge in aid of the Alzheimer’s Society. They climbed Snowdon, the highest mountain in Wales, at night by torchlight and moonlight and then returned to the bottom for a big breakfast! Hannah managed the climb and descent in 3 hours 45 minutes, and Abi took half an hour longer, a fabulous effort by both girls. They’ve already reached their fund raising target of £800 but if you would like to help them raise even more money for this very worthwhile cause please go to www.justgiving.com/fundraising/a-lawson.

Yes, they’re all Americans now. Last month David and Jailan became American citizens – they took the Oath of Allegiance and were given American passports. We guess they just wanted to be the same nationality as their children!

If you have any stories or photographs for the next issue of Hopbine, please send them to ronsmum@btconnect.com.