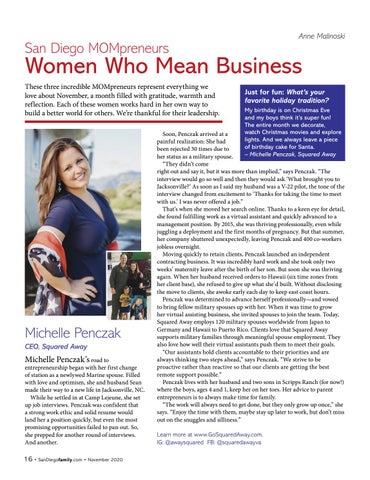 Women Who Mean Business These three incredible MOMpreneurs represent everything we love about November, a month filled with gratitude, warmth and reflection. Each of these women works hard in her own way to build a better world for others. We’re thankful for their leadership.

entrepreneurship began with her first change of station as a newlywed Marine spouse. Filled with love and optimism, she and husband Sean made their way to a new life in Jacksonville, NC. While he settled in at Camp Lejeune, she set up job interviews. Penczak was confident that a strong work ethic and solid resume would land her a position quickly, but even the most promising opportunities failed to pan out. So, she prepped for another round of interviews. And another.

Just for fun: What’s your favorite holiday tradition? My birthday is on Christmas Eve and my boys think it’s super fun! The entire month we decorate, watch Christmas movies and explore lights. And we always leave a piece of birthday cake for Santa. – Michelle Penczak, Squared Away

Soon, Penczak arrived at a painful realization: She had been rejected 30 times due to her status as a military spouse. “They didn’t come right out and say it, but it was more than implied,” says Penczak. “The interview would go so well and then they would ask ‘What brought you to Jacksonville?’ As soon as I said my husband was a V-22 pilot, the tone of the interview changed from excitement to ‘Thanks for taking the time to meet with us.’ I was never offered a job.” That’s when she moved her search online. Thanks to a keen eye for detail, she found fulfilling work as a virtual assistant and quickly advanced to a management position. By 2015, she was thriving professionally, even while juggling a deployment and the first months of pregnancy. But that summer, her company shuttered unexpectedly, leaving Penczak and 400 co-workers jobless overnight. Moving quickly to retain clients, Penczak launched an independent contracting business. It was incredibly hard work and she took only two weeks’ maternity leave after the birth of her son. But soon she was thriving again. When her husband received orders to Hawaii (six time zones from her client base), she refused to give up what she’d built. Without disclosing the move to clients, she awoke early each day to keep east coast hours. Penczak was determined to advance herself professionally—and vowed to bring fellow military spouses up with her. When it was time to grow her virtual assisting business, she invited spouses to join the team. Today, Squared Away employs 120 military spouses worldwide from Japan to Germany and Hawaii to Puerto Rico. Clients love that Squared Away supports military families through meaningful spouse employment. They also love how well their virtual assistants push them to meet their goals. “Our assistants hold clients accountable to their priorities and are always thinking two steps ahead,” says Penczak. “We strive to be proactive rather than reactive so that our clients are getting the best remote support possible.” Penczak lives with her husband and two sons in Scripps Ranch (for now!) where the boys, ages 4 and 1, keep her on her toes. Her advice to parent entrepreneurs is to always make time for family. “The work will always need to get done, but they only grow up once,” she says. “Enjoy the time with them, maybe stay up later to work, but don’t miss out on the snuggles and silliness.” Learn more at www.GoSquaredAway.com. IG: @awaysquared FB: @squaredawayva 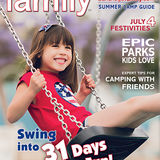