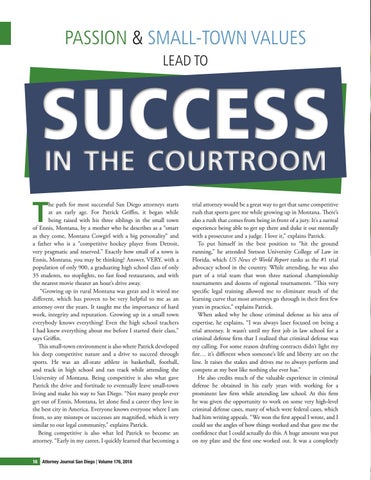 SUCCESS in the courtroom

he path for most successful San Diego attorneys starts at an early age. For Patrick Griffin, it began while being raised with his three siblings in the small town of Ennis, Montana, by a mother who he describes as a “smart as they come, Montana Cowgirl with a big personality” and a father who is a “competitive hockey player from Detroit, very pragmatic and reserved.” Exactly how small of a town is Ennis, Montana, you may be thinking? Answer, VERY, with a population of only 900, a graduating high school class of only 35 students, no stoplights, no fast food restaurants, and with the nearest movie theater an hour’s drive away. “Growing up in rural Montana was great and it wired me different, which has proven to be very helpful to me as an attorney over the years. It taught me the importance of hard work, integrity and reputation. Growing up in a small town everybody knows everything! Even the high school teachers I had knew everything about me before I started their class,” says Griffin. This small-town environment is also where Patrick developed his deep competitive nature and a drive to succeed through sports. He was an all-state athlete in basketball, football, and track in high school and ran track while attending the University of Montana. Being competitive is also what gave Patrick the drive and fortitude to eventually leave small-town living and make his way to San Diego. “Not many people ever get out of Ennis, Montana, let alone find a career they love in the best city in America. Everyone knows everyone where I am from, so any missteps or successes are magnified, which is very similar to our legal community,” explains Patrick. Being competitive is also what led Patrick to become an attorney. “Early in my career, I quickly learned that becoming a 16

trial attorney would be a great way to get that same competitive rush that sports gave me while growing up in Montana. There’s also a rush that comes from being in front of a jury. It’s a surreal experience being able to get up there and duke it out mentally with a prosecutor and a judge. I love it,” explains Patrick. To put himself in the best position to “hit the ground running,” he attended Stetson University College of Law in Florida, which US News & World Report ranks as the #1 trial advocacy school in the country. While attending, he was also part of a trial team that won three national championship tournaments and dozens of regional tournaments. “This very specific legal training allowed me to eliminate much of the learning curve that most attorneys go through in their first few years in practice,” explains Patrick. When asked why he chose criminal defense as his area of expertise, he explains, “I was always laser focused on being a trial attorney. It wasn’t until my first job in law school for a criminal defense firm that I realized that criminal defense was my calling. For some reason drafting contracts didn’t light my fire… it’s different when someone’s life and liberty are on the line. It raises the stakes and drives me to always perform and compete at my best like nothing else ever has.” He also credits much of the valuable experience in criminal defense he obtained in his early years with working for a prominent law firm while attending law school. At this firm he was given the opportunity to work on some very high-level criminal defense cases, many of which were federal cases, which had him writing appeals. “We won the first appeal I wrote, and I could see the angles of how things worked and that gave me the confidence that I could actually do this. A huge amount was put on my plate and the first one worked out. It was a completely