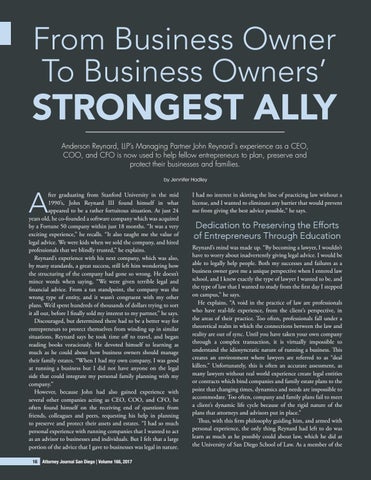 fter graduating from Stanford University in the mid 1990’s, John Reynard III found himself in what appeared to be a rather fortuitous situation. At just 24 years old, he co-founded a software company which was acquired by a Fortune 50 company within just 18 months. “It was a very exciting experience,” he recalls. “It also taught me the value of legal advice. We were kids when we sold the company, and hired professionals that we blindly trusted,” he explains. Reynard’s experience with his next company, which was also, by many standards, a great success, still left him wondering how the structuring of the company had gone so wrong. He doesn’t mince words when saying, “We were given terrible legal and financial advice. From a tax standpoint, the company was the wrong type of entity, and it wasn’t congruent with my other plans. We’d spent hundreds of thousands of dollars trying to sort it all out, before I finally sold my interest to my partner,” he says. Discouraged, but determined there had to be a better way for entrepreneurs to protect themselves from winding up in similar situations, Reynard says he took time off to travel, and began reading books voraciously. He devoted himself to learning as much as he could about how business owners should manage their family estates. “When I had my own company, I was good at running a business but I did not have anyone on the legal side that could integrate my personal family planning with my company.” However, because John had also gained experience with several other companies acting as CEO, COO, and CFO, he often found himself on the receiving end of questions from friends, colleagues and peers, requesting his help in planning to preserve and protect their assets and estates. “I had so much personal experience with running companies that I wanted to act as an advisor to businesses and individuals. But I felt that a large portion of the advice that I gave to businesses was legal in nature. 16

I had no interest in skirting the line of practicing law without a license, and I wanted to eliminate any barrier that would prevent me from giving the best advice possible,” he says.

Dedication to Preserving the Efforts of Entrepreneurs Through Education Reynard’s mind was made up. “By becoming a lawyer, I wouldn’t have to worry about inadvertently giving legal advice. I would be able to legally help people. Both my successes and failures as a business owner gave me a unique perspective when I entered law school, and I knew exactly the type of lawyer I wanted to be, and the type of law that I wanted to study from the first day I stepped on campus,” he says. He explains, “A void in the practice of law are professionals who have real-life experience, from the client’s perspective, in the areas of their practice. Too often, professionals fall under a theoretical realm in which the connections between the law and reality are out of sync. Until you have taken your own company through a complex transaction, it is virtually impossible to understand the idiosyncratic nature of running a business. This creates an environment where lawyers are referred to as “deal killers.” Unfortunately, this is often an accurate assessment, as many lawyers without real world experience create legal entities or contracts which bind companies and family estate plans to the point that changing times, dynamics and needs are impossible to accommodate. Too often, company and family plans fail to meet a client’s dynamic life cycle because of the rigid nature of the plans that attorneys and advisors put in place.” Thus, with this firm philosophy guiding him, and armed with personal experience, the only thing Reynard had left to do was learn as much as he possibly could about law, which he did at the University of San Diego School of Law. As a member of the 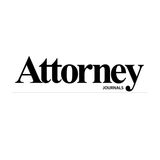