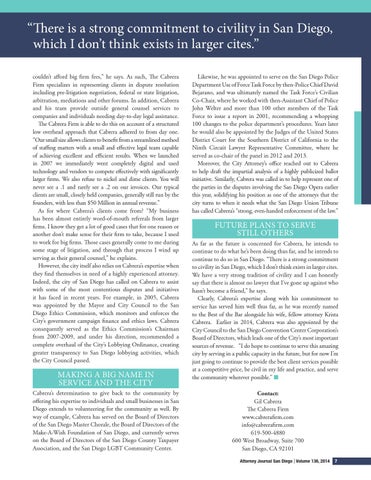 “There is a strong commitment to civility in San Diego, which I don’t think exists in larger cites.” couldn’t afford big firm fees,” he says. As such, The Cabrera Firm specializes in representing clients in dispute resolution including pre-litigation negotiation, federal or state litigation, arbitration, mediations and other forums. In addition, Cabrera and his team provide outside general counsel services to companies and individuals needing day-to-day legal assistance. The Cabrera Firm is able to do this on account of a structured low overhead approach that Cabrera adhered to from day one. “Our small size allows clients to benefit from a streamlined method of staffing matters with a small and effective legal team capable of achieving excellent and efficient results. When we launched in 2007 we immediately went completely digital and used technology and vendors to compete effectively with significantly larger firms. We also refuse to nickel and dime clients. You will never see a .1 and rarely see a .2 on our invoices. Our typical clients are small, closely held companies, generally still run by the founders, with less than $50 Million in annual revenue.” As for where Cabrera’s clients come from? “My business has been almost entirely word-of-mouth referrals from larger firms. I know they get a lot of good cases that for one reason or another don’t make sense for their firm to take, because I used to work for big firms. Those cases generally come to me during some stage of litigation, and through that process I wind up serving as their general counsel,” he explains. However, the city itself also relies on Cabrera’s expertise when they find themselves in need of a highly experienced attorney. Indeed, the city of San Diego has called on Cabrera to assist with some of the most contentious disputes and initiatives it has faced in recent years. For example, in 2005, Cabrera was appointed by the Mayor and City Council to the San Diego Ethics Commission, which monitors and enforces the City’s government campaign finance and ethics laws. Cabrera consequently served as the Ethics Commission’s Chairman from 2007-2009, and under his direction, recommended a complete overhaul of the City’s Lobbying Ordinance, creating greater transparency to San Diego lobbying activities, which the City Council passed.

Likewise, he was appointed to serve on the San Diego Police Department Use of Force Task Force by then-Police Chief David Bejarano, and was ultimately named the Task Force’s Civilian Co-Chair, where he worked with then-Assistant Chief of Police John Welter and more than 100 other members of the Task Force to issue a report in 2001, recommending a whopping 100 changes to the police department’s procedures. Years later he would also be appointed by the Judges of the United States District Court for the Southern District of California to the Ninth Circuit Lawyer Representative Committee, where he served as co-chair of the panel in 2012 and 2013. Moreover, the City Attorney’s office reached out to Cabrera to help draft the impartial analysis of a highly publicized ballot initiative. Similarly, Cabrera was called in to help represent one of the parties in the disputes involving the San Diego Opera earlier this year, solidifying his position as one of the attorneys that the city turns to when it needs what the San Diego Union Tribune has called Cabrera’s “strong, even-handed enforcement of the law.”

FUTURE PLANS TO SERVE STILL OTHERS As far as the future is concerned for Cabrera, he intends to continue to do what he’s been doing thus far, and he intends to continue to do so in San Diego. “There is a strong commitment to civility in San Diego, which I don’t think exists in larger cites. We have a very strong tradition of civility and I can honestly say that there is almost no lawyer that I’ve gone up against who hasn’t become a friend,” he says. Clearly, Cabrera’s expertise along with his commitment to service has served him well thus far, as he was recently named to the Best of the Bar alongside his wife, fellow attorney Krista Cabrera. Earlier in 2014, Cabrera was also appointed by the City Council to the San Diego Convention Center Corporation’s Board of Directors, which leads one of the City’s most important sources of revenue. “I do hope to continue to serve this amazing city by serving in a public capacity in the future, but for now I’m just going to continue to provide the best client services possible at a competitive price, be civil in my life and practice, and serve the community wherever possible.” n Contact: Gil Cabrera The Cabrera Firm www.cabrerafirm.com info@cabrerafirm.com 619-500-4880 600 West Broadway, Suite 700 San Diego, CA 92101 Attorney Journal San Diego | Volume 136, 2014