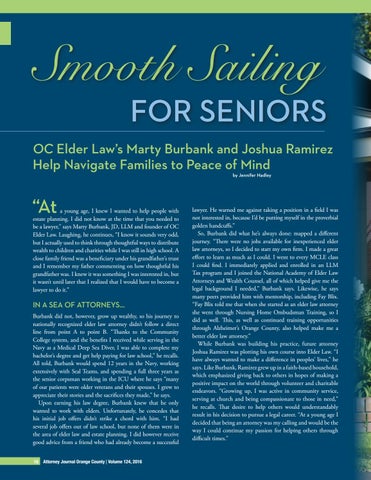 a young age, I knew I wanted to help people with estate planning. I did not know at the time that you needed to be a lawyer,” says Marty Burbank, JD, LLM and founder of OC Elder Law. Laughing, he continues, “I know it sounds very odd, but I actually used to think through thoughtful ways to distribute wealth to children and charities while I was still in high school. A close family friend was a beneficiary under his grandfather’s trust and I remember my father commenting on how thoughtful his grandfather was. I knew it was something I was interested in, but it wasn’t until later that I realized that I would have to become a lawyer to do it.”

IN A SEA OF ATTORNEYS... Burbank did not, however, grow up wealthy, so his journey to nationally recognized elder law attorney didn’t follow a direct line from point A to point B. “Thanks to the Community College system, and the benefits I received while serving in the Navy as a Medical Deep Sea Diver, I was able to complete my bachelor’s degree and get help paying for law school,” he recalls. All told, Burbank would spend 12 years in the Navy, working extensively with Seal Teams, and spending a full three years as the senior corpsman working in the ICU where he says “many of our patients were older veterans and their spouses. I grew to appreciate their stories and the sacrifices they made,” he says. Upon earning his law degree, Burbank knew that he only wanted to work with elders. Unfortunately, he concedes that his initial job offers didn’t strike a chord with him. “I had several job offers out of law school, but none of them were in the area of elder law and estate planning. I did however receive good advice from a friend who had already become a successful 16 16  Attorney Journal Orange County | Volume 124, 2016

lawyer. He warned me against taking a position in a field I was not interested in, because I’d be putting myself in the proverbial golden handcuffs.” So, Burbank did what he’s always done: mapped a different journey. “There were no jobs available for inexperienced elder law attorneys, so I decided to start my own firm. I made a great effort to learn as much as I could. I went to every MCLE class I could find. I immediately applied and enrolled in an LLM Tax program and I joined the National Academy of Elder Law Attorneys and Wealth Counsel, all of which helped give me the legal background I needed,” Burbank says. Likewise, he says many peers provided him with mentorship, including Fay Blix. “Fay Blix told me that when she started as an elder law attorney she went through Nursing Home Ombudsman Training, so I did as well. This, as well as continued training opportunities through Alzheimer’s Orange County, also helped make me a better elder law attorney.” While Burbank was building his practice, future attorney Joshua Ramirez was plotting his own course into Elder Law. “I have always wanted to make a difference in peoples’ lives,” he says. Like Burbank, Ramirez grew up in a faith-based household, which emphasized giving back to others in hopes of making a positive impact on the world through volunteer and charitable endeavors. “Growing up, I was active in community service, serving at church and being compassionate to those in need,” he recalls. That desire to help others would understandably result in his decision to pursue a legal career. “At a young age I decided that being an attorney was my calling and would be the way I could continue my passion for helping others through difficult times.”