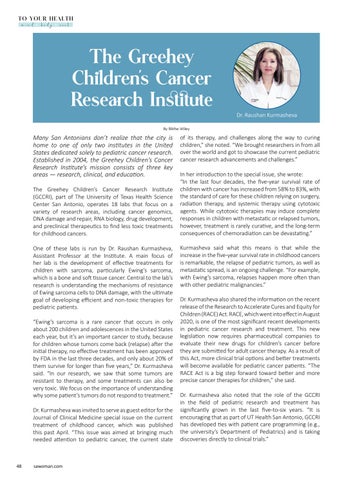 Many San Antonians don’t realize that the city is home to one of only two institutes in the United States dedicated solely to pediatric cancer research. Established in 2004, the Greehey Children’s Cancer Research Institute’s mission consists of three key areas — research, clinical, and education. The Greehey Children’s Cancer Research Institute (GCCRI), part of The University of Texas Health Science Center San Antonio, operates 18 labs that focus on a variety of research areas, including cancer genomics, DNA damage and repair, RNA biology, drug development, and preclinical therapeutics to find less toxic treatments for childhood cancers. One of these labs is run by Dr. Raushan Kurmasheva, Assistant Professor at the Institute. A main focus of her lab is the development of effective treatments for children with sarcoma, particularly Ewing’s sarcoma, which is a bone and soft tissue cancer. Central to the lab’s research is understanding the mechanisms of resistance of Ewing sarcoma cells to DNA damage, with the ultimate goal of developing efficient and non-toxic therapies for pediatric patients. “Ewing’s sarcoma is a rare cancer that occurs in only about 200 children and adolescences in the United States each year, but it’s an important cancer to study, because for children whose tumors come back (relapse) after the initial therapy, no effective treatment has been approved by FDA in the last three decades, and only about 20% of them survive for longer than five years,” Dr. Kurmasheva said. “In our research, we saw that some tumors are resistant to therapy, and some treatments can also be very toxic. We focus on the importance of understanding why some patient’s tumors do not respond to treatment.” Dr. Kurmasheva was invited to serve as guest editor for the Journal of Clinical Medicine special issue on the current treatment of childhood cancer, which was published this past April. “This issue was aimed at bringing much needed attention to pediatric cancer, the current state

of its therapy, and challenges along the way to curing children,” she noted. “We brought researchers in from all over the world and got to showcase the current pediatric cancer research advancements and challenges.” In her introduction to the special issue, she wrote: “In the last four decades, the five-year survival rate of children with cancer has increased from 58% to 83%, with the standard of care for these children relying on surgery, radiation therapy, and systemic therapy using cytotoxic agents. While cytotoxic therapies may induce complete responses in children with metastatic or relapsed tumors, however, treatment is rarely curative, and the long-term consequences of chemoradiation can be devastating.” Kurmasheva said what this means is that while the increase in the five-year survival rate in childhood cancers is remarkable, the relapse of pediatric tumors, as well as metastatic spread, is an ongoing challenge. “For example, with Ewing’s sarcoma, relapses happen more often than with other pediatric malignancies.” Dr. Kurmasheva also shared the information on the recent release of the Research to Accelerate Cures and Equity for Children (RACE) Act. RACE, which went into effect in August 2020, is one of the most significant recent developments in pediatric cancer research and treatment. This new legislation now requires pharmaceutical companies to evaluate their new drugs for children’s cancer before they are submitted for adult cancer therapy. As a result of this Act, more clinical trial options and better treatments will become available for pediatric cancer patients. “The RACE Act is a big step forward toward better and more precise cancer therapies for children,” she said. Dr. Kurmasheva also noted that the role of the GCCRI in the field of pediatric research and treatment has significantly grown in the last five-to-six years. “It is encouraging that as part of UT Health San Antonio, GCCRI has developed ties with patient care programming (e.g., the university’s Department of Pediatrics) and is taking discoveries directly to clinical trials.” 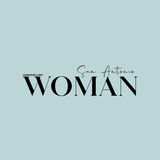