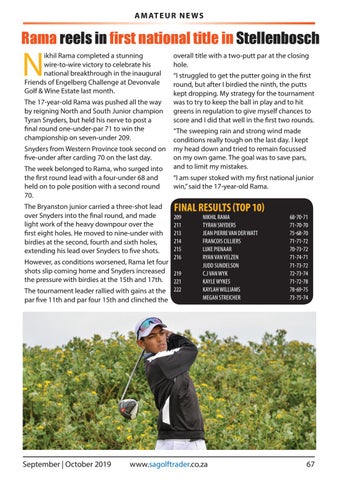 ikhil Rama completed a stunning wire-to-wire victory to celebrate his national breakthrough in the inaugural Friends of Engelberg Challenge at Devonvale Golf & Wine Estate last month. The 17-year-old Rama was pushed all the way by reigning North and South Junior champion Tyran Snyders, but held his nerve to post a final round one-under-par 71 to win the championship on seven-under 209. Snyders from Western Province took second on five-under after carding 70 on the last day. The week belonged to Rama, who surged into the first round lead with a four-under 68 and held on to pole position with a second round 70. The Bryanston junior carried a three-shot lead over Snyders into the final round, and made light work of the heavy downpour over the first eight holes. He moved to nine-under with birdies at the second, fourth and sixth holes, extending his lead over Snyders to five shots.

overall title with a two-putt par at the closing hole. “I struggled to get the putter going in the first round, but after I birdied the ninth, the putts kept dropping. My strategy for the tournament was to try to keep the ball in play and to hit greens in regulation to give myself chances to score and I did that well in the first two rounds. “The sweeping rain and strong wind made conditions really tough on the last day. I kept my head down and tried to remain focussed on my own game. The goal was to save pars, and to limit my mistakes. “I am super stoked with my first national junior win,” said the 17-year-old Rama.