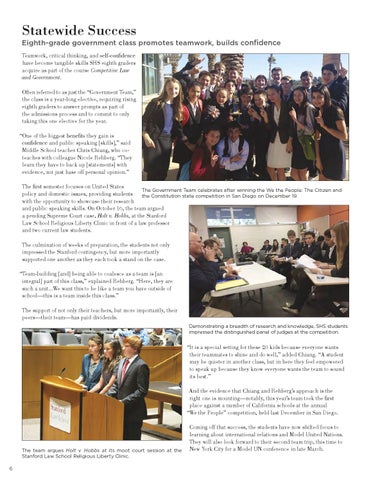 Eighth-grade government class promotes teamwork, builds confidence Teamwork, critical thinking, and self-confidence have become tangible skills SHS eighth graders acquire as part of the course Competitive Law and Government. Often referred to as just the “Government Team,” the class is a year-long elective, requiring rising eighth graders to answer prompts as part of the admissions process and to commit to only taking this one elective for the year. “One of the biggest benefits they gain is confidence and public speaking [skills],” said Middle School teacher Chris Chiang, who coteaches with colleague Nicole Rehberg. “They learn they have to back up [statements] with evidence, not just base off personal opinion.” The first semester focuses on United States The Government Team celebrates after winning the We the People: The Citizen and policy and domestic issues, providing students the Constitution state competition in San Diego on December 19. with the opportunity to showcase their research and public speaking skills. On October 16, the team argued a pending Supreme Court case, Holt v. Hobbs, at the Stanford Law School Religious Liberty Clinic in front of a law professor and two current law students. The culmination of weeks of preparation, the students not only impressed the Stanford contingency, but more importantly supported one another as they each took a stand on the case. “Team-building [and] being able to coalesce as a team is [an integral] part of this class,” explained Rehberg. “Here, they are such a unit...We want this to be like a team you have outside of school—this is a team inside this class.” The support of not only their teachers, but more importantly, their peers—their team—has paid dividends. Demonstrating a breadth of research and knowledge, SHS students impressed the distinguished panel of judges at the competition.

“It is a special setting for these 20 kids because everyone wants their teammates to shine and do well,” added Chiang. “A student may be quieter in another class, but in here they feel empowered to speak up because they know everyone wants the team to sound its best.” And the evidence that Chiang and Rehberg’s approach is the right one is mounting—notably, this year’s team took the first place against a number of California schools at the annual “We the People” competition, held last December in San Diego.

Coming off that success, the students have now shifted focus to learning about international relations and Model United Nations. They will also look forward to their second team trip, this time to New York City for a Model UN conference in late March. 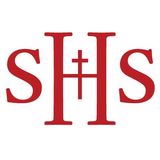