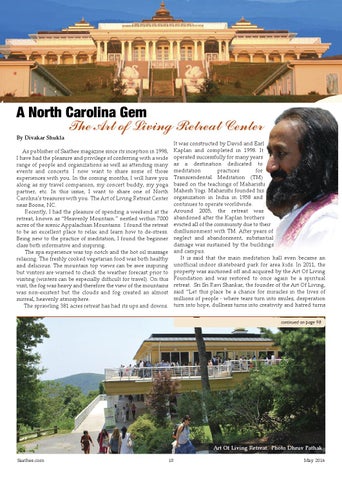 A North Carolina Gem The Art of Living Retreat Center By Divakar Shukla It was constructed by David and Earl Kaplan and completed in 1998. It operated successfully for many years as a destination dedicated to meditation practices for Transcendental Meditation (TM) based on the teachings of Maharishi Mahesh Yogi. Maharishi founded his organization in India in 1958 and continues to operate worldwide. Around 2005, the retreat was abandoned after the Kaplan brothers evicted all of the community due to their disillusionment with TM. After years of neglect and abandonment, substantial damage was sustained by the buildings and campus. It is said that the main meditation hall even became an unofficial indoor skateboard park for area kids. In 2011, the property was auctioned off and acquired by the Art Of Living Foundation and was restored to once again be a spiritual retreat. Sri Sri Ravi Shankar, the founder of the Art Of Living, said “Let this place be a chance for miracles in the lives of millions of people - where tears turn into smiles, desperation turn into hope, dullness turns into creativity and hatred turns

As publisher of Saathee magazine since its inception in 1998, I have had the pleasure and privilege of conferring with a wide range of people and organizations as well as attending many events and concerts. I now want to share some of those experiences with you. In the coming months, I will have you along as my travel companion, my concert buddy, my yoga partner, etc. In this issue, I want to share one of North Carolina’s treasures with you. The Art of Living Retreat Center near Boone, NC. Recently, I had the pleasure of spending a weekend at the retreat, known as “Heavenly Mountain.” nestled within 7000 acres of the scenic Appalachian Mountains. I found the retreat to be an excellent place to relax and learn how to de-stress. Being new to the practice of meditation, I found the beginner class both informative and inspiring. The spa experience was top notch and the hot oil massage relaxing. The freshly cooked vegetarian food was both healthy and delicious. The mountain top views can be awe inspiring but visitors are warned to check the weather forecast prior to visiting (winters can be especially difficult for travel). On this visit, the fog was heavy and therefore the view of the mountains was non-existent but the clouds and fog created an almost surreal, heavenly atmosphere. The sprawling 381 acres retreat has had its ups and downs. A monthly features magazine bridging the Indian Subcontinent and America

A monthly features magazine bridging the Indian Subcontinent and America