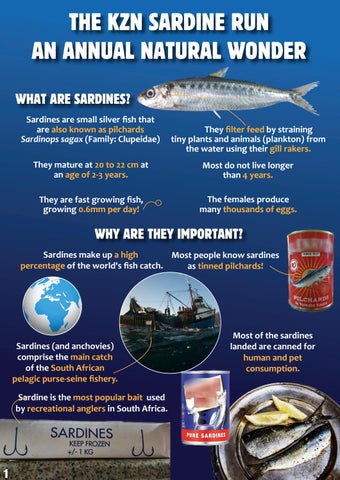 the KZN sardine run AN ANNUAL NATURAL WONDER what are sardines? Sardines are small silver ﬁsh that are also known as pilchards Sardinops sagax (Family: Clupeidae)

They ﬁlter feed by straining tiny plants and animals (plankton) from the water using their gill rakers.

Most do not live longer than 4 years.

They are fast growing ﬁsh, growing 0.6mm per day!

The females produce many thousands of eggs.

WHY ARE THEY IMPORTANT? Sardines make up a high Most people know sardines percentage of the world&#39;s ﬁsh catch. as tinned pilchards!

Sardines (and anchovies) comprise the main catch of the South African pelagic purse-seine ﬁshery. Sardine is the most popular bait used by recreational anglers in South Africa.

Most of the sardines landed are canned for human and pet consumption.

WHY ARE THEY IMPORTANT? Catches ﬂuctuate widely but have been decreasing. From an average annual catch of 232 000 tons during the early 2000s, catches have declined to 12 000 tons in 2019. The ﬁshery supports thousands of jobs and sustains many coastal communities mainly in the Western Cape.

WHERE are our sardines found? They form huge shoals in the upper layers of the ocean.

The larvae move northwards up the West Coast. South Africa

WHAT IS THE KZN SARDINE RUN? Adults of the eastern stock migrate annually northwards up the east coast of southern Africa in a narrow band of cooler water that exists between the coast and the warm Agulhas Current. Occurs primarily in the winter months of June and July.

They spawn inshore in KZN until spring.

Eggs and larvae are dispersed southwards. Seine netters travel up and down the coast in search sardine shoals. Up to 600 tons are netted each year in beach-seine nets along the KZN coast during the annual sardine run. Dive operators, ﬁshing charters, hotels and accommodation facilities along the KZN and the Eastern Cape coast rely on the sardine season for tourism during the winter months. Fishermen ﬂock to the beaches following the sardines in search of gameﬁsh – the related expenditure on tackle, bait, accommodation and food are a boost to the local economy.

People of all shapes and sizes gather sardines with anything that holds a few ﬁsh – buckets, shirts, skirts, hats – anything goes!

Where do they go after the RUN? It is believed that the remaining sardines move oďŹ&amp;#x20AC;shore into deeper water and may gradually move southwards.

WHY IS IT SO IMPORTANT ecologically? Copper, blacktip, dusky and spinner sharks join gameďŹ sh such as geelbek, shad and garrick, dolphins, seals, gannets, cormorants and the occasional penguin all accompany the shoals.

Up to 100 000 gannets may follow the shoals. Thousands of common dolphins may follow the sardines. Brydes and humpback whales also join the feast. Watch the video https://youtu.be/I43YyFaf2Dc

Watch as Common dolphins, tuna and a shark feast on a sardine bait ball. Videography by Thor Eriksen. 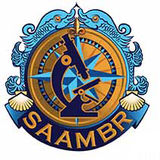