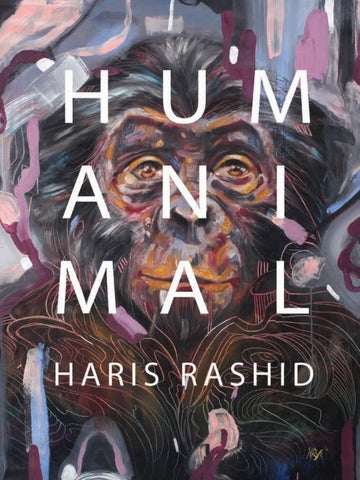 Art has been a part of this young artist’s life from early on, particularly since his high school days, encouraged by his mother, who also was his school’s art teacher. For a short period Haris Rashid studied Textile Technology at the tertiary level, but later switched to Illustration, obtaining his diploma from The One Academy. After completing his formal studies, he opted to pursue art as a career, and is today a full time artist.

As he continues to develop his visual language, Haris often experiments with various media combinations and surfaces, wood and textured pressed paper being two surfaces he likes working with most. In addition to producing his art, Haris is also the founder and leader of a young artist collective studio known as Studio Mekar. In recent years, wild animals have become the mainstay of his topical focus, both for his concern for these animals, whose numbers in the wild are fast dwindling, as well as his fascination for them. His current artworks embody the idea of animals exhibiting human characteristics, a notion that has fueled a number of pieces in the last several months, leading up to his second solo, HUMANIMAL. Hearing about more and more atrocities being committed by man has led Haris to sometimes wonder whether there is more humanity to be found in his animal subjects than in mankind itself. Haris Rashid’s works in HUMANIMAL are visually a departure from the more carefully crafted illustrative style he is known for, as he continues to experiment and develop his own visual language. The more liberated and expressive strokes seen in the majority of works in this exhibition complement the deep soul-searching process that his second solo has turned out to become.