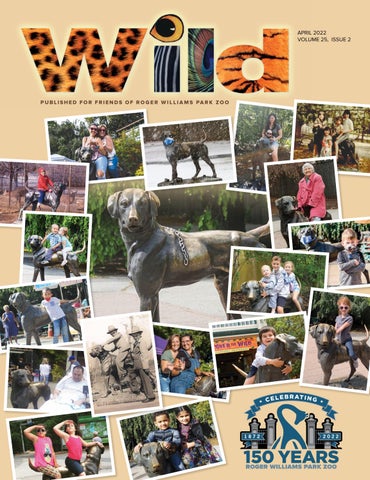 A hundred and fifty

years of family fun! A

century and a half bringing the wonders of nature to the people of Rhode Island. A zoological sesquicentennial! It is Roger Williams Park Zoo’s big One Five Oh; and it is my pleasure to kick off our birthday celebration as my first contribution to our membership magazine.

the Zoo every year in addition to creating experiences for every guest that empower them to join us in conserving wildlife and wild places. From the interactive displays and direct contact with our passionate team members to the

animals themselves, these moments build connections and

establishment in 1872 so visitors could get a closer look at

wildlife; and the first landscape design from 1878 clearly shows habitats for elephants, waterfowl, bears, bison, monkeys and deer distributed throughout the park.

The Zoo takes a scientific approach to all its activity, as well as helping increase our scientific understanding of the natural world. We actively participate in 55 Species Survival

It is also important to recognize the public/private

Plans® which propagate endangered and threatened

species in zoos and hold leadership positions in seven

the City of Providence that has advanced the zoo’s success

of the programs. Our team members have contributed

for sixty years, because connecting people with wildlife and

to six scientific publications in the past five years. Our

the park have always been inextricably linked.

veterinarians also serve as adjunct instructors for the Tufts

Today’s professional Zoo has four mission pillars – recreation, education, science and conservation. In today’s urban society, we know our guests’ primary reason for visiting is to enjoy time outdoors with family and friends, building a closer connection with nature and each other – no different than the reason an earlier generation’s visionary leaders established this park. Roger Williams Park has been called the Jewel of Providence and the People’s Park and both are as true today as they were in the 1870s. Education is a top priority for us, and we work hard to make it fun. My belief is that a trip to the Zoo should focus on having a great time and accidentally learning something – whether it is something about an animal’s natural history, how they can take action to become better stewards of our shared environment and natural resources, or spark curiosity

We welcome almost 35,000 young people on field trips to

University School of Veterinary Medicine, teach sections of a

What I can tell you is that there are species of New England wildlife that owe their existence today to the efforts the Roger Williams Park Zoo and there are organizations and projects protecting wildlife in South America that were launched and sustained with resources, inspiration and expertise that came from Providence. I hope you are thinking, “The Zoo does all that?” because my reply would be that we are just getting started. Your stalwart support has helped place us in a position to grow into the zoo of the future – in which we are champions for empathy and engagement with our guests in Rhode Island, and to engage them as stewards for nature around the world. Congratulations for the legacy your stewardship has created in an institution that was among the first of its kind in the course at the University of Rhode Island and provide animal welfare expertise to Brown University. Conservation is also key to who we are and what we do.

nation. Thank you for supporting your zoo as it continues to strengthen its regional reputation for excellence in conservation, science, education and recreation. Happy birthday to Roger Williams Park Zoo!

Simply put, conservation is the wise use of resources. So, our commitment to saving endangered species and sustaining wild places starts right here. We strive to use best practices in everyday operations to conserve the Earth’s resources through environmentally friendly behaviors such as managing our carbon footprint, along with reducing, recovering and recycling other materials, promoting a healthier planet for all. Science and conservation go hand in hand; and it is often difficult to put our projects in one category or the other.

A menagerie building opened, exhibiting a wide variety of exotic creatures including a tiger, a leopard and a pair of lions. The Zoo’s first elephant, Roger, joined the Menagerie in 1893.

A “menagerie” of small animals and birds was brought to a section of the park so that visitors could get a closer look at wildlife. This led to the official designation of this portion of Roger Williams Park as a “zoo.”

1890 Alice, the Zoo’s second elephant, and most famous resident moved to a new elephant barn. Thereafter, elephants that joined the Zoo family were named in Alice’s honor.

The Zoo continued to grow and include more animals. There were no admission gates or naturalistic habitats as a 21st-century visitors’ experience.

Thanks to funding raised through the Rhode Island Zoological Society, the Zoo’s animals moved inside a newly fenced compound for greatly improved security, maintenance, and husbandry conditions.

The Zoo enjoyed a “rebirth” opening with a new nature center, the iconic polar bear exhibit, a boardwalk through a native wetlands area, and a field for North American bison.

Roger Williams Park Zoo was the first zoo in New England to earn accreditation from the Association of Zoos and Aquariums (AZA).

An operating agreement and lease were signed between the City and Society in 2005 that fully transitioned management of the Zoo to the Society.

The major overhaul of the Fabric of Africa exhibit was completed, with the addition of wild dogs, wildebeests that share the enclosure with zebras, a significantly enhanced elephant yard, and a renovated and expanded Textron Elephant and Giraffe Pavilion.

The John J. Palumbo Veterinary Hospital, dedicated by Sophie Danforth and her daughter Stephanie Chafee, was completed. It featured 55% more square footage than the previous facility and appropriate and separate facilities for each medical function.

Hasbro’s Our Big Backyard opened. This outdoor play and exploration area includes the CVS Health Treehouse; a greenhouse for education programs and a variety of events; Our House, with education program space, and The Nature Swap, a “trading post” that fosters interaction with nature; plus a “backyard” with a number of unstructured play areas.

The Zoo’s first venomous snake exhibit opened in the spring to showcase the timber rattlesnake species, the focus of one of the Zoo’s important conservation initiatives.

The ALEX AND ANI Farmyard opened with a walkthrough barn to the public and interactive features like a contact yard where people pet and feed goats and sheep.

The Zoo announced Tree Kangaroo Awareness Month to celebrate the opening of its new Matschie’s tree kangaroo exhibit in the World of Adaptations building, making the new baby, Holly, visible to the public for the first time.

The Zoo added a Komodo dragon in the World of Adaptations making Elsie the only Komodo dragon in New England. The Soaring Eagle Zip Ride opened offering breathtaking views 115 feet high allowing riders to see out over Providence and into Narragansett Bay in comfortable side-by-side seats.

2017 The Faces of the Rainforest exhibit opens in November 2018 as part of Phase One of the Zoo’s 20-year Master Plan.

The Zoo’s new commissary building is fully operational, allowing for the preparation of healthy, nourishing diets for the over 150 animals that call the Zoo home.

Thanks to support from the city of Providence and Rhode Island Commerce’s HArT Recovery Grant Program, the Zoo launches its first-ever Holiday Lights Spectacular - soon to become an annual tradition.

Membership helps you save with FREE admission every time you visit during regular Zoo hours. Members also enjoy discounts at Zoo gift shops, on education and family programs, and for special events like

Follow us on social media for your chance to win a FREE yearlong RWPZoo family membership each week beginning April 7th. Join us weekly as we highlight our rich history and shine a spotlight on building a bright future for wildlife and wild places together. 9

ZOOBILEE! FEAST WITH THE BEASTS PRESENTED BY BANKRI RETURNS TO CELEBRATE ITS 30TH YEAR ON

Celebrate the art, beauty and wonder of 2000 years of tradition

April 13 – July 4, 2022 Journey through a wonderland of illuminated larger-than-life lanterns inspired by our wild world. The Zoo is transformed into a dazzling evening experience with interactive displays, delicious Asian-inspired cuisine and performances. This enchanting multicultural experience is sure to delight all ages!

Make Your Own Zoo (From firstpalette.com)

Supplies you will need: • A4 or Letter size cardstock • Crayons or colored pencils

To celebrate our Zoo’s 150th birthday, find out how well you know our wonderful history and see how much of a Roger Williams Park Zoo fan you are!

What name has been passed down to the elephants throughout the Zoo’s history?

a. Mary b. Harold

This person founded the Rhode Island Zoological Society and without their kindness and generosity, the zoo would not be here today.

Which Zoo building used to be the original Menagerie building, dating all the way back to the very beginning of the Zoo?

a. The Gift Shop

b. World of Adaptations

4. Cover the enclosures with clay.

c. The Faces of the Rain Forest

What majorly successful event did the Zoo hold between 1992 to 2000?

a. Meet Elsa the Albino Alligator

11. Place the animals inside their enclosures.

Guess Zoo? Can you identify these animals? 2

Answers located on bottom of page.

SPECIAL THANKS TO OUR ANNUAL MEDIA SPONSORS!

YOGA WITH THE ELEPHANTS

YOGA WITH THE ELEPHANTS August 6

BREW AT THE ZOO August 27

Look for the AZA logo whenever you visit a zoo or aquarium as your assurance that you are supporting a facility dedicated to providing excellent care for animals, a great experience for you, and a better future for all living things. With its more than 200 accredited members, AZA is a leader in global wildlife conservation, and your link to helping animals in their native habitats. For more information visit www.aza.org

WILD Magazine is a print publication produced by Roger Williams Park Zoo to provide our members the inside scoop on Zoo news, which includes upcoming events, new exhibits, seasonal offerings, and other exciting happenings at the Zoo. 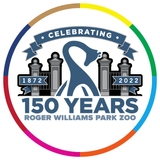