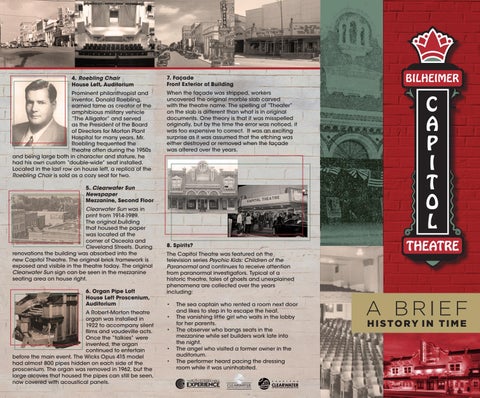 4. Roebling Chair House Left, Auditorium Prominent philanthropist and inventor, Donald Roebling, earned fame as creator of the amphibious military vehicle “The Alligator” and served as the President of the Board of Directors for Morton Plant Hospital for many years. Mr. Roebling frequented the theatre often during the 1950s and being large both in character and stature, he had his own custom “double-wide” seat installed. Located in the last row on house left, a replica of the Roebling Chair is sold as a cozy seat for two.

7. Façade Front Exterior of Building When the façade was stripped, workers uncovered the original marble slab carved with the theatre name. The spelling of “Theater” on the slab is different than what is in original documents. One theory is that it was misspelled originally, but by the time the error was noticed, it was too expensive to correct. It was an exciting surprise as it was assumed that the etching was either destroyed or removed when the façade was altered over the years.

5. Clearwater Sun Newspaper Mezzanine, Second Floor Clearwater Sun was in print from 1914-1989. The original building that housed the paper was located at the corner of Osceola and Cleveland Streets. During renovations the building was absorbed into the new Capitol Theatre. The original brick framework is exposed and visible in the theatre today. The original Clearwater Sun sign can be seen in the mezzanine seating area on house right. 6. Organ Pipe Loft House Left Proscenium, Auditorium A Robert-Morton theatre organ was installed in 1922 to accompany silent films and vaudeville acts. Once the “talkies” were invented, the organ continued to entertain before the main event. The Wicks Opus 415 model had almost 800 pipes hidden on each side of the proscenium. The organ was removed in 1962, but the large alcoves that housed the pipes can still be seen, now covered with acoustical panels.

8. Spirits? The Capitol Theatre was featured on the television series Psychic Kids: Children of the Paranormal and continues to receive attention from paranormal investigators. Typical of a historic theatre, tales of ghosts and unexplained phenomena are collected over the years including: • The sea captain who rented a room next door and likes to step in to escape the heat. • The vanishing little girl who waits in the lobby for her parents. • The observer who bangs seats in the mezzanine while set builders work late into the night. • The angel who visited a former owner in the auditorium. • The performer heard pacing the dressing room while it was uninhabited.

A BRIEF HISTORY IN TIME

ABOUT THE BILHEIMER CAPITOL THEATRE

The Capitol Theatre has been a vital part of downtown Clearwater since its opening on March 21, 1921 with the motion picture Dinty. The 1920 American silent comedy drama film was written by Marshall Neilan specifically for the young actor Wesley Barry, and also featured Colleen Moore, Marjorie Daw, and Noah Beery The Capitol Theatre was built by Senator John S. Taylor, and was described by the Clearwater News as one of the most beautifully finished playhouses in the South. The following was published on opening night: “The policy of the new Capitol Theatre is to present to the public nothing but the cleanest and best entertainments, whether it be pictures or road attractions. “ Over the next seventy-four years theatergoers were treated to several live entertainment performances including: vaudeville stars Sally Rand, Fred Stone and Lum & Abner; war bond rallies; the Miss Florida Pageant; Clearwater Symphony Orchestra performances; as well as movies from cinema operators EJ Sparks, Paramount, ABCSoutheastern Theatres and Plitt Southern. In 1995, local businessman Socrates Charos purchased the building and operated the Royalty Theater Company, which presented silent films and cultural events. Facing foreclosure in 2009, The City of Clearwater purchased the building and entered into a partnership with Ruth Eckerd Hall to manage and operate the facility, reopening it in April 2009. In 2013 the Capitol Theatre underwent a major renovation expanding into the Clearwater News building and another adjacent building. The result of the renovation was expanded seating and lobby spaces, six private loge boxes, an outdoor balcony overlooking the Clearwater Causeway, a VIP lounge, and a rooftop terrace. In 2019 the Capitol Theatre was renamed the Nancy & David Bilheimer Capitol Theatre after the philanthropic couple donated to the Expanding the Experience Capital Campaign. Their generosity enabled the Marcia P. Hoffman School of the Arts to expand its arts education programs throughout the community.

POINTS OF INTEREST: 1. Panel of Honor Front Lobby During renovations, the Panel of Honor was revealed, hidden for almost 90 years. Local historians found a record of this memorial honoring Clearwater citizens who served in World War I. Notable Clearwater names such as Coachman, McMullen, Plumb and Turner appear on the nearly 20 ft. wall. A star beside a name indicates the soldier died in service to his country, Soldiers of color were noted in green paint, typical of segregation at the time. The portion of the wall that was removed can be found preserved at the Clearwater Library Main Branch. The Panel of Honor was painted on the west wall of the original Clearwater Sun Building, and was likely dedicated on Armistice Day, now known as Veteran’s Day. 2. 1921 Seats Grande Lobby The theatre opened in March 1921 with 944 seats, and the capacity has fluctuated over the years. Rows were removed in 1981 to build a larger stage. Offices and dressing rooms were built, lowering the capacity to 433. Today the Capitol Theatre has 739 fixed seats. The 1921 seats on display were found at a Clearwater estate sale in 2013. 3. 1921 Stage Floor Ray and Geri Trautlein Dress Circle Lounge, Second Floor The original stage floor was replaced in 2013 after 90 years of use. Upon removal, a section of the floor was installed as the threshold into the Ray & Geri Trautlein Dress Circle Lounge, making it possible for every Circle of Stars member to claim that they have walked across the original stage of the Capitol Theatre. 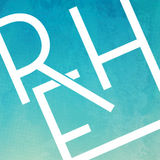 A Brief History In Time | The Bilheimer Capitol Theatre

A Brief History In Time | The Bilheimer Capitol Theatre