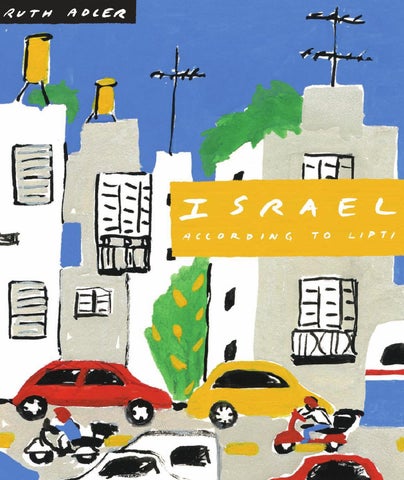 In 1985, I was so excited to find myself back in Israel, I could barely contain myself. To me, Israel was dynamic and invigorating; it was a mix of the east and west, the ancient and modern. And the light — it was magical. I felt a deep connection to this place, to its people and history, with all its struggles and difficulties. That same year, I started a company called Lipti with my then husband, Avi Dayan, designing and printing T-shirts (Lipti was his nickname for me). The subject matter came from the Israeli landscape, real and imagined, as did the color palette — I wanted to capture the vibrant hues of the Mediterranean, from the purple of the desert mountains and perfect blue of the sky to the vibrant yellow of the sand and turquoise of the Dead Sea. For me, being somewhere in between a textile designer, painter, and illustrator, with a graphic language influenced by Matisse, David Hockney and Milton Avery, painting pictures of the place I loved and printing them on T-shirts was a perfect fit. Before long, people all over Israel — and tourists too — were wearing my T-shirts. Israelis embraced them because, I think, the designs represented a real but brightly optimistic side of the country, one that many Israelis had a hard time conceiving of on their own. And so it was that I began traveling the country, creating designs that reflected the people who were wearing them, and what it meant to live in Israel — the Gulf War, Shuk Ha’Carmel, wildflowers in winter, the desire for peace. For this book I have compiled my original sketches and T-shirt designs from 1985 to 1998, my journey as Lipti. Ruth Adler Tel Aviv, 2014

On my first visit to Tel Aviv, in 1971, my love affair with the city began. The Bauhaus city, sun-drenched, with a skyline littered with TV antennas and solar water heaters. Cars everywhere, laundry hanging on clotheslines, dingy makolot (corner stores) everywhere. And signs in Hebrew! This was a lived-in city, a people city, an energetic, brash, nervy, pushing-the-boundaries place. And a city lucky enough to have one of the most beautiful beaches of the Mediterranean right at its doorstep.

In the late 1970â&amp;#x20AC;&amp;#x2122;s, Jerusalem was a much smaller city than it is today. The dramatic and breathtaking approach to the city itself made the biggest impression on me â&amp;#x20AC;&amp;#x201D; the steep, winding road passing by ancient terraces and unkempt grape orchards, a tiny hilltop village here and there.

In the bottom left corner is a yahrzeit candle in memory of Yitzhak Rabin. After the murder of this courageous peacemaker, the mood of the country changed. We didnâ&amp;#x20AC;&amp;#x2122;t just lose our prime minister; we lost momentum in the peace process. So many of us miss Rabin and hope for new leaders to rise in the region who will put an end to the turmoil.