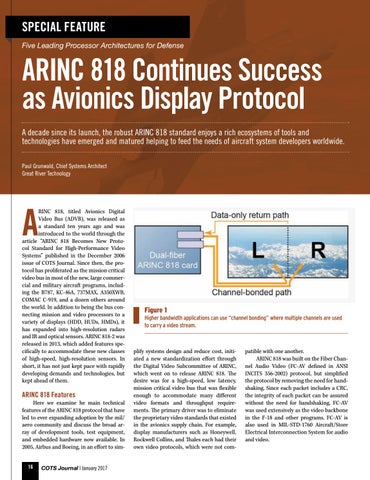 RINC 818, titled Avionics Digital Video Bus (ADVB), was released as a standard ten years ago and was introduced to the world through the article “ARINC 818 Becomes New Protocol Standard for High-Performance Video Systems” published in the December 2006 issue of COTS Journal. Since then, the protocol has proliferated as the mission critical video bus in most of the new, large commercial and military aircraft programs, including the B787, KC-46A, 737MAX, A350XWB, COMAC C-919, and a dozen others around the world. In addition to being the bus connecting mission and video processors to a variety of displays (HDD, HUDs, HMDs), it has expanded into high-resolution radars and IR and optical sensors. ARINC 818-2 was released in 2013, which added features specifically to accommodate these new classes of high-speed, high-resolution sensors. In short, it has not just kept pace with rapidly developing demands and technologies, but kept ahead of them.

ARINC 818 Features Here we examine he main technical features of the ARINC 818 protocol that have led to ever expanding adoption by the mil/ aero community and discuss the broad array of development tools, test equipment, and embedded hardware now available. In 2005, Airbus and Boeing, in an effort to sim16

Figure 1 Higher bandwidth applications can use “channel bonding” where multiple channels are used to carry a video stream.

plify systems design and reduce cost, initiated a new standardization effort through the Digital Video Subcommittee of ARINC, which went on to release ARINC 818. The desire was for a high-speed, low latency, mission critical video bus that was flexible enough to accommodate many different video formats and throughput requirements. The primary driver was to eliminate the proprietary video standards that existed in the avionics supply chain. For example, display manufacturers such as Honeywell, Rockwell Collins, and Thales each had their own video protocols, which were not com-

patible with one another. ARINC 818 was built on the Fiber Channel Audio Video (FC-AV defined in ANSI INCITS 356-2002) protocol, but simplified the protocol by removing the need for handshaking. Since each packet includes a CRC, the integrity of each packet can be assured without the need for handshaking. FC-AV was used extensively as the video backbone in the F-18 and other programs. FC-AV is also used in MIL-STD-1760 Aircraft/Store Electrical Interconnection System for audio and video. 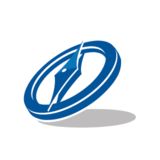