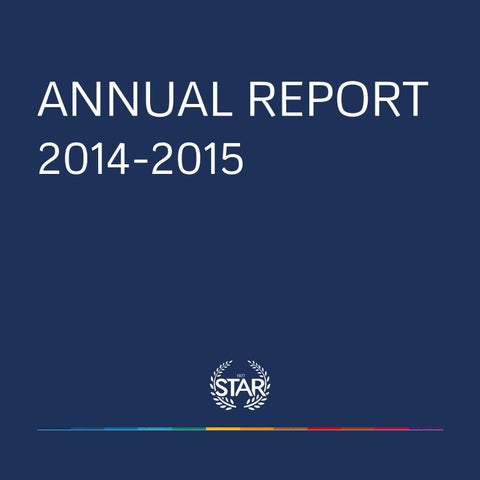 PREFACE September 17th 2014, the 37rd STAR year officially commenced at the General Assembly of Members. From that moment onwards, together with our Active Members and devoted alumni, we as 37th STAR Board have been responsible for a year full of successful events. This Annual Report states both the qualitative and the quantitative outcomes of the year 2014-2015. It shows the unforgettable events, strategic accomplishments and STAR’s steady financial performance. It was a year that made an enormous impact; together, we have enabled thousands of students to participate in great events. The fundaments of these events are the students who organize them, our ‘Active Members’. They are of crucial importance to our association and I’m truly thankful for their efforts and energy, which made our association excel. I sincerely hope that you enjoyed your year as an Active Member and that you had the opportunity to LEARN.GROW.EXCEL.

In addition, the substantial and continuous support of Rotterdam School of Management, Erasmus University and our corporate partners, ensures our success is sustainable – now and in the future. I obviously would also like to extend my warmest thanks to STAR’s Supervisory Board and Verification Committee for your dedication, support and advice. At the same time, we wish the 38th STAR Board the best of luck and every success in continuing STAR’s journey! Putting this Annual Report together makes us grasp a sense of what impact we have actually had this year. I am extremely proud of my fellow Board members, it was an honor to be in the STAR Board with you and I’ll miss you guys.

Thank you for a fantastic year. Yours sincerely,

ABOUT STAR STAR is the study association of Rotterdam School of Management, Erasmus University (RSM). With 6,500 members, STAR is Europeâ&amp;#x20AC;&amp;#x2122;s largest study association and above all the most active and professional study association in the Netherlands. STARâ&amp;#x20AC;&amp;#x2122;s mission is to enrich RSM student life; from various perspectives, offering students to join events or organize these themselves. Each year, around 280 dedicated active members organize STAR projects that reach thousands of students. STAR provides students with the opportunity to get in contact with their fellow students, their studies and a broad range of companies. This is facilitated by the great amount of activities that are organized by numerous committees and Master Study Clubs.

Apart from academic activities like speakers events, case competitions or selling books, STAR also aims to organize social activities, ranging from freshmen introduction days to periodic parties. RSM students can join us on several international trips; the ski trip, surf trip, race of the classics, various international weeks organized all over the world, study trips and a community development project. The best known events are the STAR Management Week, which consists of social, academic and career events; Erasmus Consultancy Project, where students conduct research for companies in an emerging country and the Erasmus Recruitment Days, which is the largest recruitment event of the Benelux organized by students.

HISTORY In 1969, the ‘Interfaculteit Bedrijfskunde’ (and later on ‘Interuniversitair Instituut Bedrijfskunde’ - IIB) was established, a joint initiative of various faculties of both Erasmus University and Delft University of Technology. In 1977, S.V.I.I.B. (studievereniging IIB) was founded, an association focused on external contacts, internal contacts with scientific staff, and, of course, mutual contacts among business students. The exact meaning of S.V.I.I.B. was lost in 1984, when the faculty of Business Administration became an official part of Erasmus University, and so the name changed to Sviib.

Over the past 38 years, STAR has become an association of influence, diversity, and professionalism. With more than 6,500 members, including 280 active members, we can proclaim to be the largest study association in Europe.

As with the establishment of Rotterdam School of Management (RSM) as we know it today, which led to a more cohesive organisation of BA, IBA, and MBA studies, the aim was to achieve the same cooperation among study associations. Several daughter associations (Dutch: disputen) were established and later on consolidated as Master Study Clubs. More importantly, in early August 2005, Sviib and BActive (association for students of the programme in International Business Administration) merged to become STAR (Study Association of the Rotterdam School of Management), an association with a bit of both worlds and an international focus.

BA and IBA Introduction Days 280 freshmen were introduced to their fellow students and STAR.

Heartbeat Festival In cooperation with the university, the academic year was opened at a festival with e.a. Dotan.

Eurekaweek After the general introduction of STAR, students were invited to Divoza to enjoy dinner and drinks.

Booksale One of the yearly operations of STAR: always supplying RSM students with the right books.

General Assembly of Members The 37th STAR Board has been officially inaugurated and the policy, financial statement and operations of the 36th STAR Board were reviewed.

Active Member Weekend During a fun weekend with lots of activities the active members of 2014-2015 had the opportunity to meet their fellow committee/ MSC members.

STAR Management Week Two weeks in which all pillars of STAR were exposed via company visits, company dinners, inhouse days, seminars, conferences and social events with Shell as main sponsor. The week finished with a closing party at Westelijk Handelsterrein.

Constitution Drink All the active members and other associations in the Netherlands had the opportunity to celebrate the inauguration of the 37th STAR Board STAR Christmas Gala After a fancy dinner we partied until dawn at the Kuip.

Eurotrip A group of students went on an exiting week to Istanbul with the first Eurotrip!

OPERATIONS The Speaker Series Over the year the Speaker Series had four successfull events with a Q500 edition and an edition focused on Innovation. Erasmus Recruitment Days The largest on-campus recruiting event in the Benelux with 2500 participating this year in exciting recruitment activities with over a hundred companies. Ski Trip The ski trip was again a very popular trip, with lots of participants and fun!

OPERATIONS Erasmus Charity Run International Week 30 students from all over the world came to Rotterdam to experience The Netherlands. Consultancy Castle The Netherlands best and brightest meet the top consulting firms in a very chique setting.

Student Business Battle Together with the biggest study associations of the Netherlands, an academic event with different companies was held.

OPERATIONS ... and much more! During the year, all committees have worked very hard to set-up activities for all RSM students. Not all activities are mentioned in this yearly report, but photo’s can be found on social media (facebook.com/rsmstar) and more information can be found on our website (www.rsmstar. nl)! MSC Study Trips A lot of Master Study Clubs went on trips all over the world: Silicon Valley (MSC BIM), Lisboa (MSC GBSM), Bejing &amp; Shanghai (MSC Strategy), Helsinki (MSC Management) and much more!

STRATEGY Year after year STAR draws a policy document. In November 2014 we drafted a document that was the result of a strategy session that took place under the supervision of alumni working for PwC, Bol.com and the Boston Consulting Group. In this annual report we aim to provide you with a brief overview of the progress so far and the results that aim to create a strong fundament for the upcoming years. We truly believe that by executing STAR’s 2015 policy the association has made another step towards fully enriching RSM student’s life. The fact that our association works with a policy document is one of the perks for the board. It keeps them from solely doing day-to-day operational work and helps them focus on what matters in the foreseeable future. The policy document functions as a guideline through the year and helps board members to keep adding long-term value during their dynamic year. We build our strategy based on a so called Strategy House (see next page), in which we identify the strategic focal points that help contribute to our mission, which is based upon the four pillars of our association. By supporting students in their career orientation (1), enriching them academically (2), make sure they have fun (3) and enriching the students socially by contributing to society (4) we try to provide a total package that enriches the life of RSM students. None of all this would have been possible if it were not for the students that organize the various activities that underpin these pillars, our ‘Active Members’. We continued to develop them during the organization of their activities and sincerely believe that this is of crucial importance to our association. In addition to the four pillars there are four layers that support the Strategy House, namely: Fundamentals, Active Members, Projects &amp; Members. These layers consist of so-called value-drivers. These value-drivers are the focus points of the strategy for 2015. On the next pages we will provide a brief overview of what has been achieved per layer. To maintain a continuous focus on RSM’s international students while executing our strategy, we added Internationals as a vertical pillar on the right side of the house.

As can be seen in our policy document, we described the best possible situation by identifying all of our focus areas. These focus areas are used in a layered structure for our strategy map. For all these layers, we described the main achievements over the past academic year.

Key results Fundamentals • Extensive cut in overhead costs; and • Created more insight in the added value of STAR for students via movies, social media; and • The addition of interactive membership value tools to the website; and • Introduced several periodically reoccurring STAR marketing initiatives; and • Further development of STAR’s web shop.

These key results would not have been possible without the continuous dedication of STAR’s nine board members and all active members. We sincerely hope that these results have laid a steady fundament for the upcoming years and trust that the next board will continue to develop our great association.

Audit obligation Under section 396 (6) Book 2 of the Netherlands Civil Code, the association is exempt from the obligation to have the financial statements audited by an auditor. Consequently, no audit has been requested and therefore no auditor’s report has been issued.

On behalf of the Board, Other income

Copyright ÂŠ 2015 Study Association Rotterdam School of Management, Erasmus University Besides legal exceptions nothing in this publication may be copied and/or made public without prior written permision from the publisher. We have taken the utmost care in compiling this publication. However, we are not responsible for errors or incomplete information. 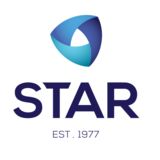